Update : Bill Moyers has now started censoring my comments on his blog.

In order to be a progressive like Bill Moyers, you have to learn to dispense with all rational thought, and turn logic on its head. 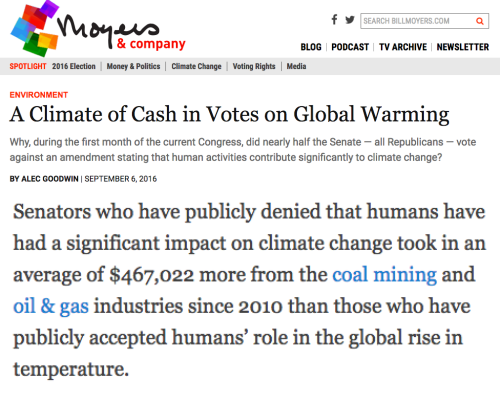 A Climate of Cash in Votes on Global Warming – BillMoyers.com

Bill is very upset that companies are giving small donations to senators who don’t want to put them out of business over irrational superstitions. But for some reason, Bill isn’t upset about the billions of dollars going to scientists who push the global warming scam for the government.

But then Bill gets fully irrational with this picture, which seems to be an attempt to blame high gas prices on global warming. His graph ends in 2008, which was probably the last time his brain was functional. Since the fracking boom began, gas prices have plummeted.

Why does anyone listen to morons like Bill Moyers?