You can’t make this stuff up. One layer of temperature fraud piled on another.

RSS lower troposphere temperature data shows that cooling over the last 10 months has been the fastest on record.

So Carl Mears of RSS rushed out a press release today saying 2016 was the hottest year, not to use lower troposphere temperatures, and instead imagine we live at 20,000+ feet.

Meanwhile, yesterday, Zeke Hausfather told the press that there never was a hiatus. (The same hiatus which experts made dozens of excuses for over the past decade, and Michael Mann says is real.)

Today, Zeke says we should compare GISS surface temperatures to Carl Mears upper troposphere temperatures, and ignore all those air temperatures down near where we live.

But here comes the fun part. Zeke then said to compare the upper troposphere temperatures with the “most commonly used sonde data (RATPAC)“

So why is Zeke using RATPAC data?  Because it is heavily adjusted. RATPAC adjustments quadrupled warming relative to the raw radiosonde data generated by Jim Angell at NOAA since 1958

The hockey stick of adjustments to the radiosonde data mirrors all the fake adjustments done to surface temperature data sets by NASA and NOAA. 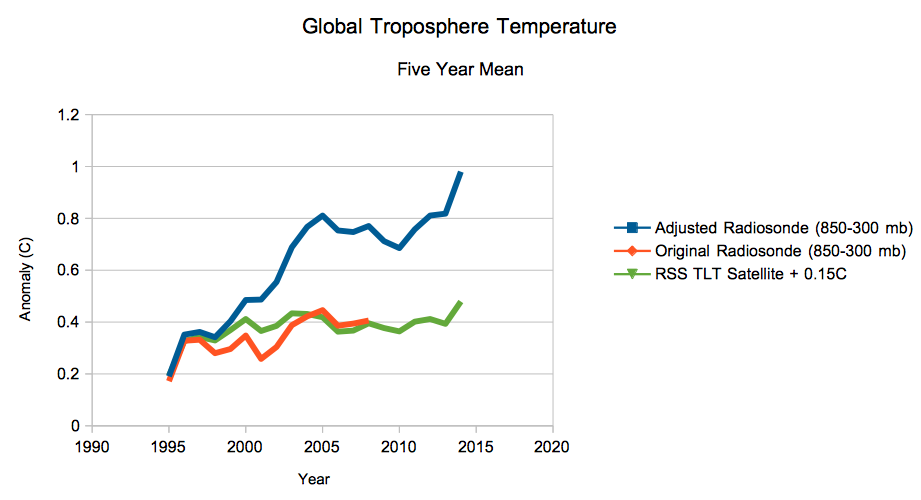 Essentially all of the warming since 1958 is due to data tampering. The game they play is to adjust one data set upwards, then use the adjusted data as an excuse to successively adjust all the other ones upwards to match, in a domino effect. This was aptly described in the Climategate E-mails as “hiding the decline.”