Mosher is afraid to come over here, and is posting more nonsense on WUWT. 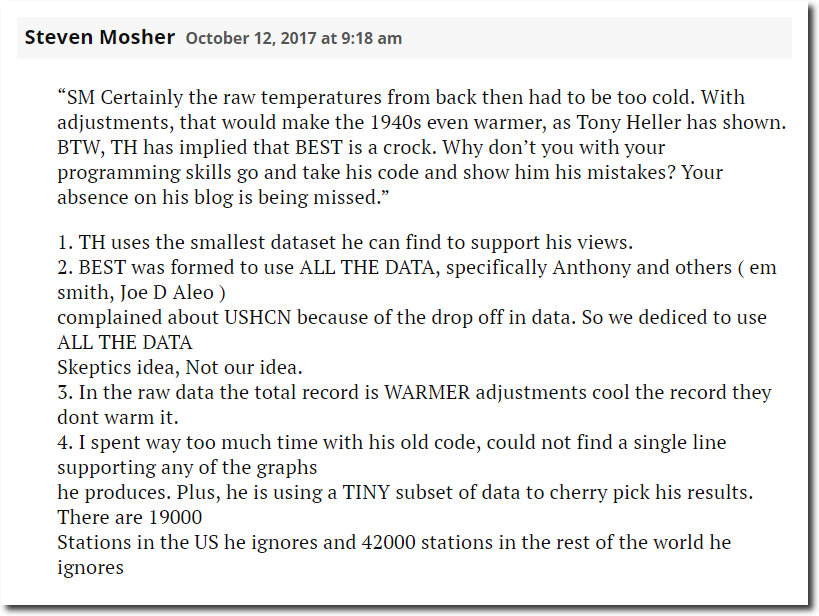 Dirty bird carcasses tell the story of how air pollution has improved in the last 100 years | Watts Up With That?

Mosher’s stupidity and dishonesty is impressive.

4. I spent way too much time with his old code, could not find a single line supporting any of the graphs

His inability to analyze and run code which thousands of other people have used is very telling, but quite believable for the crew of incompetents at Berkeley Earth.

The USHCN data set (which NOAA has been using for decades) is about 1200 stations which were chosen because of the quality of the stations. I didn’t choose them, NOAA did. Gavin says you only need half that many.

There is no reason to use more US stations. The quality of the USHCN stations is infinitely superior to the garbage set of global stations which Berkeley Earth uses. Mosher’s argument is idiotic, at best.  And as Nick Stokes and Zeke have explained, there is very good reason not to use all of the US stations. It is called “changing station composition.”

The number of US GHCN stations has changed dramatically over time. Stations are being added at more southerly locations. The quality of reporting at the new stations has been declining. Even if you use all of the US GHCN stations, you get basically the same pattern. The frequency of hot days is declining. A better experiment would be to use all US GHCN stations which have been continuously active over the past century. This eliminates the problem of changing station composition, and produces results almost identical to the USHCN data set. Maximum temperatures are declining, as is the frequency of hot days. The addition of a large number of US GHCN stations in the 1950’s (mostly at lower latitudes) introduced about 0.3F warming bias. 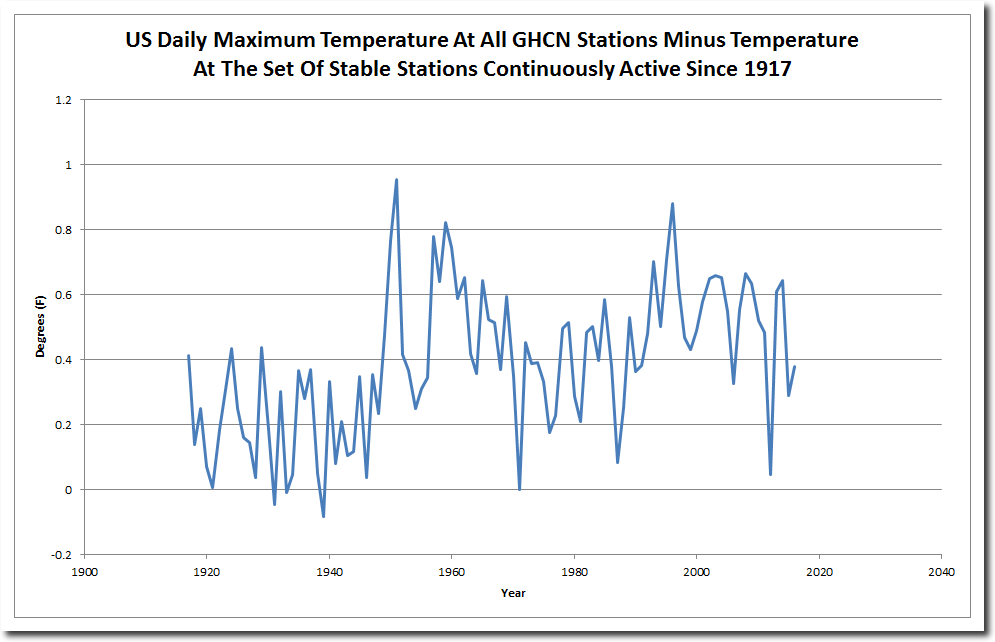 There is very good reason not to use all of the US GHCN stations. Mosher has no clue what he is talking about, and is directly contradicting Zeke and Nick about changing station composition.

No matter how many times Mosher and his friends lie about it, there is no correlation between CO2 and hot weather. And I’m not ignoring the complete set of global stations. Quite the opposite. I’m documenting that they don’t exist. Without daily temperature data, GHCN station data is illegitimate.  There is no such thing as a monthly thermometer.