Has Been Coldest, Hottest, Dryest, Wettest In U S. Over Large Area.

Washington, July 9, (AP) — A dizzying succession of phenomenal weather — most of it bad, has made the last 12 months one of the most remarkable periods on the weather bureau’s books. In one part of the country or another, weather men have recorded the coldest winter, the hottest summer, the worst floods, the most devastating dust storms| and the most severe tornadoes and hurricanes in history. The central and eastern portions of the country recorded the extremes in low temperatures during the winter of 1935-36,

“At Devils Lake, N. D. Bureau officials said, “there was established a winter temperature record that probably had no parallel in the weather history of this country for a first-order weather bureau station. The temperature went below freezing on November 27 and did not rise to the freezing point until March 1, a period of 96 days.”

The average temperature for January and February at Devils Lake was 13 degrees below zero.

FROM COLD TO HOT. It is in this same region where record heat is now being recorded within the last week, A report of 112 degrees was received from Devils Lake. Kennebec, S. D., reported a maximum of 119 degrees.

Temperatures in the Dakotas have ranged around and over 100 degrees for more than a week,” 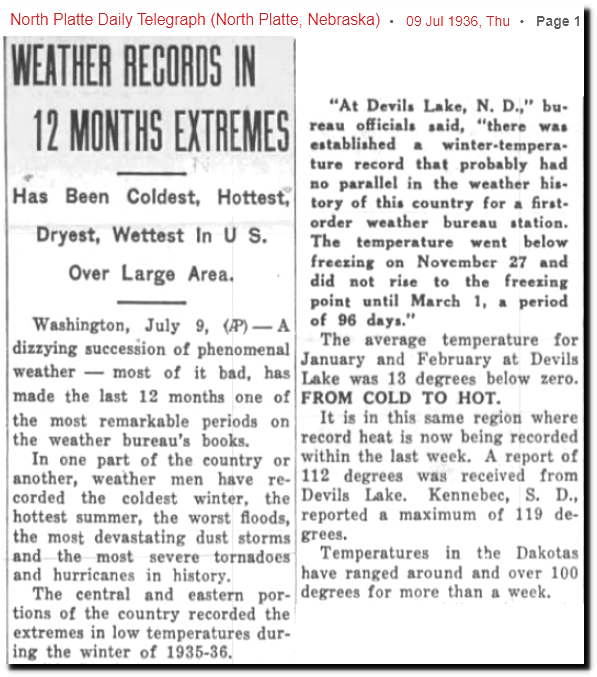