In 1920, Scientific American reported that the atmosphere was deficient in CO2, and that crop productivity could be greatly enhanced by introducing CO2 emissions from smokestacks, and that earth was covered with luxuriant forests when CO2 levels were much higher. It is said that some amazing experiments that have been carried out in Germany may lead to a revolution in agriculture, and solve the world’s greatest problem—that of food. It has long been obvious to all thinking people that the only hope for the world lies in the development of agricultural science, so that two blades of wheat or maize or rice may be made to grow where only one grew before. The problem is a pressing one, and in his attempt to solve it Dr. Riedel, of Essen, a German scientist, seems to have obtained marvelous results. As we all know, the green leaves of plants take carbon dioxide from the atmosphere, and in some way produce starch and sugar to feed the plant. Now, the ordinary atmosphere contains only about one twenty-fifth of 1 per cent. of it bulk of carbon dioxide, or four parts in every ten thousand parts of air; and twenty million cubic yards of air; and twenty million cubic yards of air are needed to furnish the carbon for a tree whose wood weighs ten thousand pounds. Knowing all this, Dr. Riedel conceived the idea of speeding up the growth of plants by giving them extra supplies of carbon dioxide. Living and working in a great manufacturing district, Dr. Riedel realised that vast volumes of carbon dioxide, harmful to man and beast, were being thrown into the atmosphere every hour, and lost. He calculated that an ironworks dealing with 4,000 tons of coke a day in its blast furnaces produces about 250 million cubic feet of carbon dioxide. There were, therefore, immense supplies available. Dr. Riedel set to work, designed a process for arresting the gas, and took out patents. Then he put his great idea into practice. He set aside three greenhouses, in each of which the same kind of plants were grown under similar conditions, except that in one house extra supplies of carbon dioxide were to be supplied from blast furnaces. The test began in June. The results were such as to amaze even the scientist. A few days after starting the test the leaves of a castor oil plant in the greenhouse sup-plied with gas measured a yard across, while the largest leaf of a similar plant in the other greenhouse was about 18 inches. The height in-creased correspondingly. Tomatoes in the greenhouse supplied with gas weighed 175 per cent. more than in the other houses, and cucumbers showed increase of 70 per cent.

At the same time experiments were made in the open air, gas being sup-plied to a plot of land through open-ings in cement pipes arranged all around. The gassed plot showed an increase of 150 per cent. in spinach, 180 per cent. in potatoes, and 100 per cent. in parsley. Quite recently the experiment has been tried of gassing a barren and hitherto uncultivated piece of land not very far from Berlin and results have been equally remarkable. From these results there seems to be no doubt that fertilising the air with carbon dioxide is a more efficient and cheaper way of increasing the crops than treating the ground with manures. In greenhouses in winter the same coke furnace that supplies the heat will provide, the additional carbon dioxide. Dr. Riedel believes that before long ironworks will be systematically sup-plying carbon dioxide to farmers.” 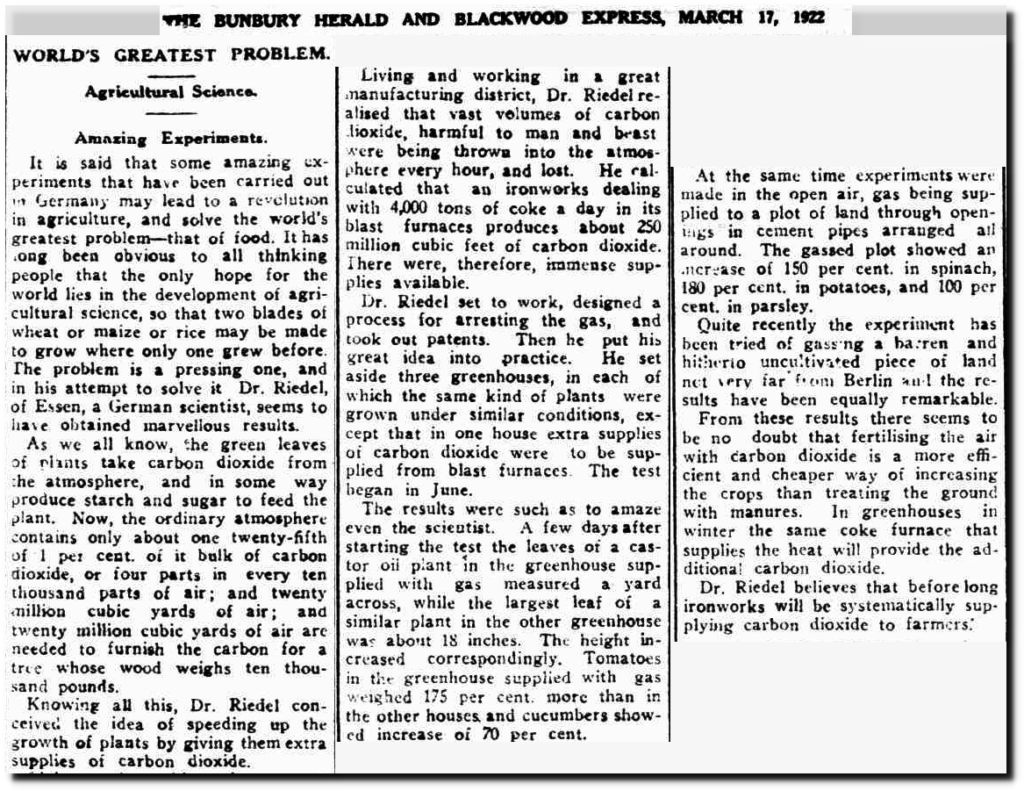