“STANDING redwood trees are almost immune from forest fires and this fact necessitates a distinction between the redwood and pine forests in California in any consideration of light burning, a test of which is advocated by the California Forest Protective Association and other private associations and lumbermen for the sake of clearing the forest floor of debris and thus preventing big destructive fires. In the redwood forests slashings and underbrush occasionally cause fires hot enough to burn to the tops of redwood trees, destroying their branches and foliage but in nearly every case they put out new foliage the next season. This immunity of redwoods to fire is due partly to the climate of the redwood region and partly to the absence of resin in the wood and its thick non-combustible bark. The primary pine region extends from the Oregon line south through the Sierra Nevada :Mountains following closely the line of winter snows and being 2,000 to 3,000 feet above sea level. The timber is in open, park-like stands anll in early days the forest floor was kept clear from brush anll litter by the light burning practised by the Indians and the occasional fires caused by lightning. The trees passed through several centuries of these fires to make splendid timber. In these days of close fire prevention and control a rank growth of underbrush has sprung up in California pine forests and there is much debris in places. This causes hot fires which are hard to control and often burn mature trees. Fire tends to prevent fire as is shown by the small timber losses of 1912 and subsequent years, following 1910, in which year forest fires were the most disastrous known for years in California. Since 1915 the loss each year has been greater than the season before. increasing from less than 2 per cent of the 1910 loss in ]915 to over 60 per cent in 1919, thus showing that the underbrush is accumulating.” 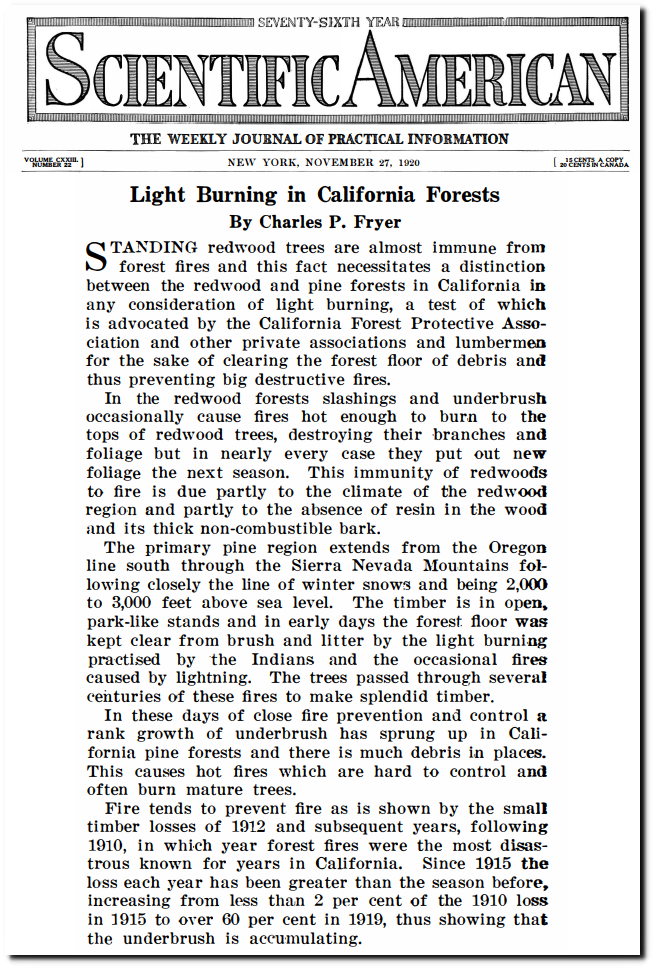