“Is the North Pole going to melt entirely?”

Is the North Pole going to melt entirely? Are the Arctic regions warming up, with the prospect of a great climatic change in that part of the world?

Science is asking these questions (says “Popular Science Siftings”). Reports from fishermen, seal hunters, and explorers who sail the seas around Spitsbergen and the eastern Arctic all point to a radical change in climatic conditions, with hitherto unheard-of high temperatures on that part of the earth’s surface. Observations to that effect have covered the last five years during which the warmth has been steadily increasing. In August the Norwegian Department of Commerce sent an expedition to Spitzbergen and Bear island under the leadership of Dr. Adolf Hoel, professor of geology in the University of Christiania, the object in view being to survey and chart areas productive of coal and other minerals. The expedition sailed as far north as 81 deg. 29 min. N. latitude in ice free water. Such a thing, hitherto, would have been deemed im-possible. The United States Consul at Bergen, Norway, Mr. Ifft, also reports the recent extraordinary warmth in the Arctic. He quotes incidentally the statements of Captain Martin Ingebrigstsen, a mariner who sailed those seas for 54 years. The captain says that he first noted an annual warmth in 1918; and since then temperatures have risen steadily higher. Today the eastern Arctic

is “hardly recognisable as the same region of 1868 to 1917.” Many of the old landmarks are greatly altered, or no longer exist. Where formerly there were great masses of ice, these have melted away leaving behind them accumulations of earth and stones such as geologists call “moraines.” At many points where glaciers extend far into the sea half a dozen years ago they have now entirely disappeared. The change in temperature has brought great changes in the plant and animal life of the Arctic. Formerly vast shoals of whitefish were found in the waters round Spitzbergen, but last summer the fishermen sought them in vain. Seals Disappear. Seals which used to be plentiful in those seas, have almost entirely dis-appeared. It would seem as if the ocean must have become uncomfortably warm for some of its denizens which formerly frequented those latitudes, causing them to flock north ward towards the Pole. On the other hand other kinds of fishes, hitherto unknown so far north have made their appearance. Shoals of smelt have arrived, and immense schools of herring are reported by fishermen along the west coast of Spitzbergen. Formerly the waters about Spitzbergen have held an even summer temperature in the neighborhood of 5 degrees above freezing. This year it rose as high as 28 degrees. Last winter the ocean did not freeze over even on the north coast of Spitzbergen. This is on the authority of Dr. Hoel. This state of affairs is a cause of much surprise and even astonishment to scientists, who wonder whether the change is merely temporary or the beginning of a great alteration of the climatic conditions in the Arctic, with consequent melting of the polar ice sheet.” 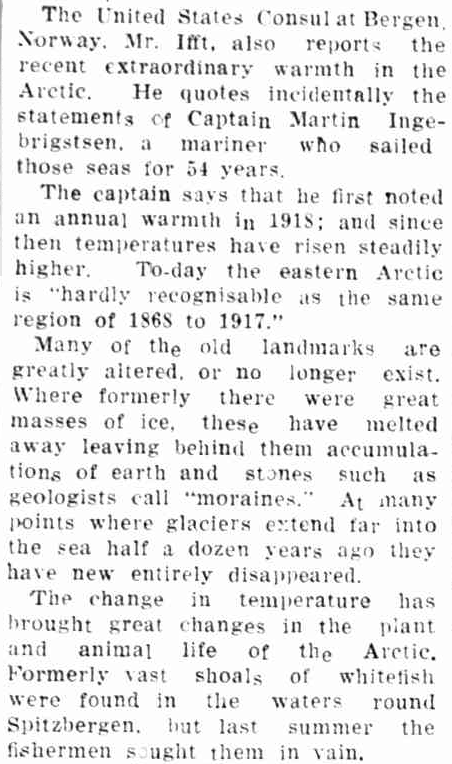 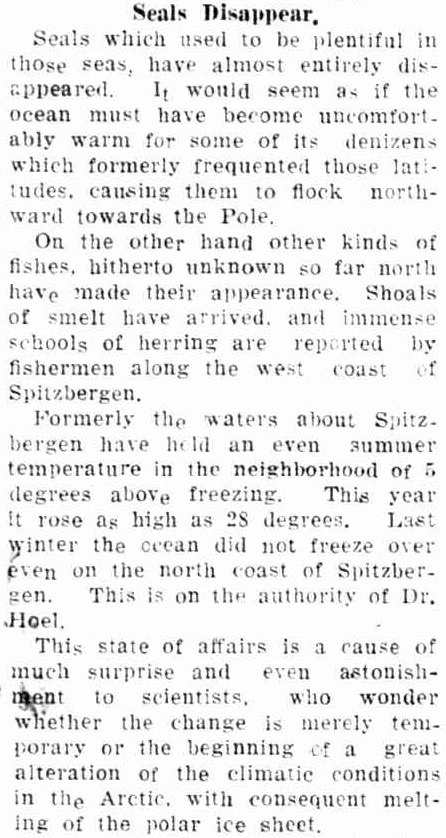 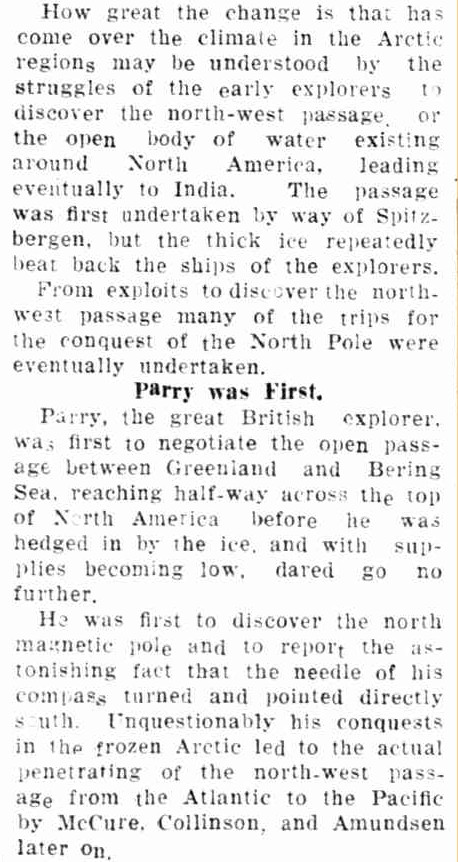