“Not even trying: the corruption of real science” 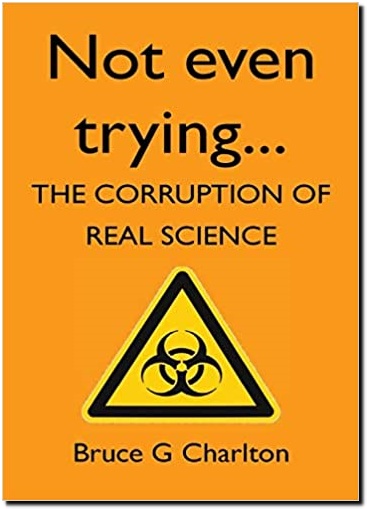 Briefly, the argument of this book is that real science is dead, and the main reason is that professional researchers are not even trying to seek the truth and speak the truth; and the reason for this is that professional ‘scientists’ no longer believe in the truth – no longer believe that there is an eternal unchanging reality beyond human wishes and organization which they have a duty to seek and proclaim to the best of their (naturally limited) abilities. Hence the vast structures of personnel and resources that constitute modern ‘science’ are not real science but instead merely a professional research bureaucracy, thus fake or pseudo-science; regulated by peer review (that is, committee opinion) rather than the search-for and service-to reality. Among the consequences are that modern publications in the research literature must be assumed to be worthless or misleading and should always be ignored. In practice, this means that nearly all ‘science’ needs to be demolished (or allowed to collapse) and real science carefully rebuilt outside the professional research structure, from the ground up, by real scientists who regard truth-seeking as an imperative and truthfulness as an iron law.

12 Responses to “Not even trying: the corruption of real science”