Pleasant Is The New Hot

Texas had a very mild December which the state climatologist described as “hot.”

From Dallas through Abilene to Del Rio, temperatures averaged 5 to 9 degrees above normal, making December 2021 the warmest December in more than 130 years.

“Not only is it by far the warmest December since the beginning of comprehensive weather records, it will probably also turn out to be the warmest winter month, period,” said Nielsen-Gammon.

February 2017 holds the current record for warmest winter month in Texas, with an average temperature of 58.4 degrees.

The official state record for warmest December is held by December 1933, at 53.3 degrees. The 20th-century average for December is 46.9 degrees, he noted.

“Texas has never had any month more than 10 degrees above the 20th-century average until now,” Nielsen-Gammon said.

He thinks that when all the data are in, December 2021 will average nearly 12 degrees above the long-term average.

Although data is limited, there does seem to have been one other December in recorded history with comparable warmth: December 1889.

“Observing practices were different, but it’s clear that December 1889 was an unusual month also,” Nielsen-Gammon said. “The first decent cold front of that month was on Dec. 29.”

One bad result of the very warm weather — it has made Texas’ drought situation even worse.

The hot weather has exacerbated drought conditions throughout the state. According to the U.S. Drought Monitor, more than two-thirds of the state is in drought, and 10 percent is in extreme drought.

“In much of West Texas, it hasn’t rained for over two months,” Nielsen-Gammon said. “The high temperatures increase the rate of evaporation, drying out everything and leading to increased wildfire risk.”

Climate change has caused Texas seasonal temperatures to average about two degrees warmer than in the 20th century.

“Global warming didn’t cause this December to be record-setting, but it did contribute to the margin of victory,” he said. December 1977 had the most hot days, which like this year was a La Nina year and there was a severe drought in the west. Texas hottest December temperature was 98 degrees at Encinal on December 1, 1921. The warmest this year was 92 degrees. There have been twenty-six Decembers with temperatures as warm or warmer than this year.

Texas had seven December days over 90F in 1921, compared to two this year.  What made this year unusual was a lack of cold weather. 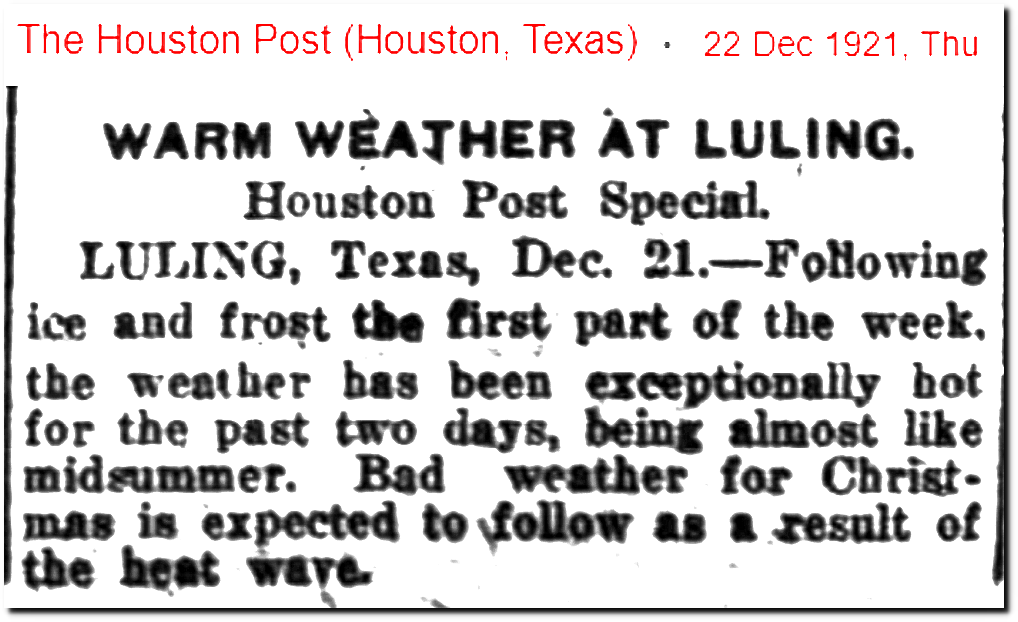 Texas longest stretch of 90 degree days was 157 at Encinal in 1921, which was the hottest year on record in Texas. Last year was below average temperature in Texas and had an unusually low number of hot days. 13 Responses to Pleasant Is The New Hot