“Is the Arctic climate becoming more temperate? Remarkable new information, given by the famous Swedish authority, Professor H. Wilson Ahlmann, in a lecture to the Swedish Geographical Society, suggests that this may be the case.

Professor Ahlmann was speaking on the collated results of his expedition last summer to north-east Greenland, where he has been making glaciological studies on Clavering Island, in connection with his earlier researches in the most northerly parts of the Atlantic. The address was given before a brilliant assembly of scientists, and was illustrated by an array of magnificent colour photographs.

Professor Ahlmann stated that the glaciers of northeast Greenland show clear signs of a change towards a warmer climate. As has been observed in other parts of the Arctic, especially in Spitzbergen, the melting has increased rapidly. All, or at any rate by far the largest number of local glaciers in northeast Greenland have receded very greatly during recent decades, and it would not be exaggerating to say that these glaciers are nearing a catastrophe.” 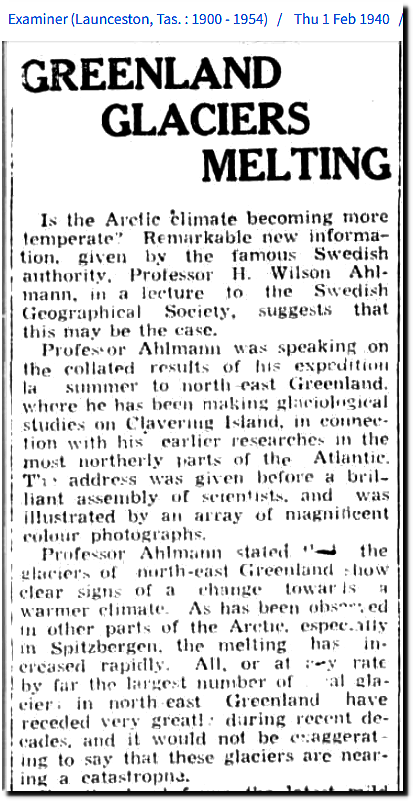