Sixty Years Of Corruption At The FDA

Thalidomde was approved by corrupt government officials on the take – so nothing has changed over the past 60 years.

“on the third day of June 1960—Mr. George P. Larrick, U.S. Commissioner of Food and Drugs, the man responsible for policing abuses in the marketing of drugs in this country, appeared as a witness before the Senate Subcommittee on Antitrust and Monopoly in Washington, D.C. He was there primarily to explain how it was that his professional subordinate and personal friend, Henry Welch, Ph.D., then chief of the antibiotics division of the Food and Drug Administration, had managed to obtain and keep official sanction for an arrangement under which Dr. Welch collected more than a quarter of a million dollars in private fees as editor of antibiotics promotion journals at the same time he was being paid a government salary for judging the worth of antibiotics to physicians and their patients. Mr. Larrick explained that he had trusted his antibiotics division chief completely, hence had no cause to ask for figures when Dr. Welsh assured him that only a few small honoraria were involved in straightforward editorial work free of ethical conflict.”

“the National Academy panel recommended that the drug law be changed to require new drugs to he proved effective as well as safe before going onto the market.” 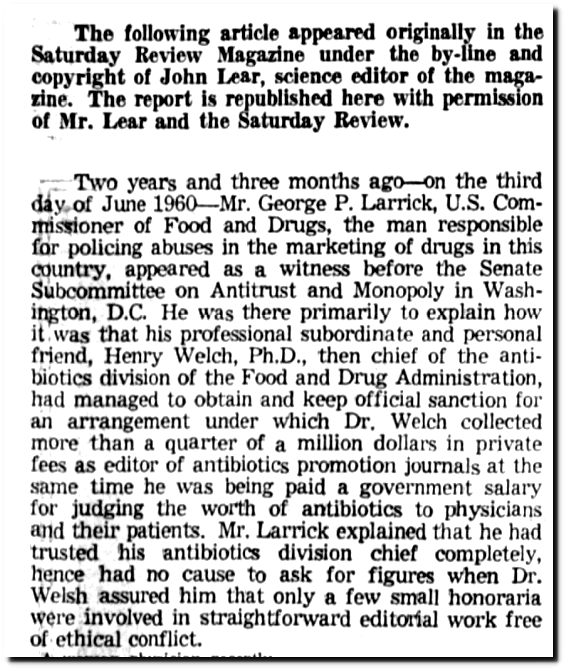 In Australia, it is illegal for doctors to dispute official government lies.

“Health practitioners are obliged to ensure their views are consistent with public health messaging.”

8 Responses to Sixty Years Of Corruption At The FDA