“Did CIA Director William Casey really say, “We’ll know our disinformation program is complete when everything the American public believes is false”?

“I am the source for this quote, which was indeed said by CIA Director William Casey at an early February 1981 meeting of the newly elected President Reagan with his new cabinet secretaries to report to him on what they had learned about their agencies in the first couple of weeks of the administration. The meeting was in the Roosevelt Room in the West Wing of the White House, not far from the Cabinet Room. I was present at the meeting as Assistant to the chief domestic policy adviser to the President. Casey first told Reagan that he had been astonished to discover that over 80 percent of the ‘intelligence’ that the analysis side of the CIA produced was based on open public sources like newspapers and magazines. As he did to all the other secretaries of their departments and agencies, Reagan asked what he saw as his goal as director for the CIA, to which he replied with this quote, which I recorded in my notes of the meeting as he said it. Shortly thereafter I told Senior White House correspondent Sarah McClendon, who was a close friend and colleague, who in turn made it public. Barbara Honegger bshonegg@gmail.com” 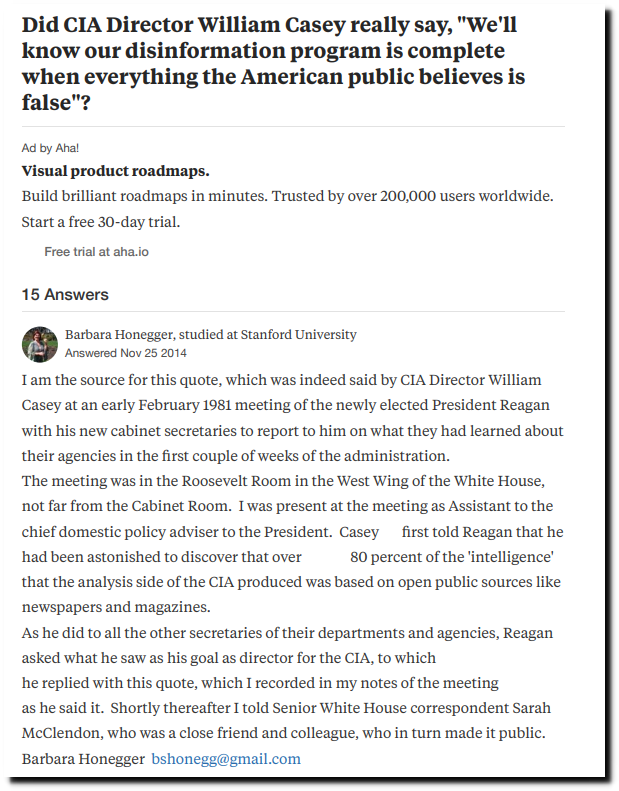 2 Responses to “We’ll know our disinformation program is complete”