“The Coming Exodus to Siberia and Canada

And now min is adding to the amount of burning coal ay nothing was ever burned on earth before since the fires of its glowing core were quenched by its crust. Up to 1845 man had burned 27,700, 000 tons in all history, In the one year of 1911 we burned not less than 500,000,000 tons! This is a terrific thing to contemplate—the Passengers engaged in such a tremendous robbery of the coal bunkers—but we are now concerned only with carbonic acid gas, and its effects on the climate,

If we keep up the increase to even half the extent. which seems certain, we shall pour into the air enough carbon dioxide to double the amount of it in the atmosphere in eight hundred years, The probabilities are that the amount will be tripled in less than a thousand years—and your children and mine will be here then!

One of the greatest scientists in the world is Arrhenius of Sweden, He is a chemist and physicist, and has studied this matter, He shows that this proportion of carbon dioxide in the air will make the climate warmer, by acting like the glass roof of a green house, With the carbon dioxide increased from two and one-half to three times, the temperature of the whole world will be raised 8 to 9 degrees centigrade—and Greenland will have a good climate for farming. All the good soil of Canada will be in a§ temperate a climate as that now enjoyed by Missouri.

Corn will be grown in the Peace River Valley. Oranges will be an orchard fruit in Arkansas and Virginia. The suburban residents of Chicago may literally sit under their own fig trees and seuppernong grape arbors, Cotton will be a stable crop in Iowa, Bananas will fringe the shores of the Gulf. Siberia will become the greatest farming country in the world, The great Antarctic continent—one of the greatest on Earth in extent—will be the Western Canada, the Scandinavia, the Siberia of that day, and will have millions of people, Alaska will be as warm as Maine now is, And the heat of all the tropics will be made hotter for thousands of years.” Five years ago Steven Hawking made the science even worse. Arrhenius made a fundamental error in that he didn’t recognize  H2O is a greenhouse gas.  Knut Angstrom pointed this out in 1901, and showed experimentally that adding CO2 has very little impact on climate. 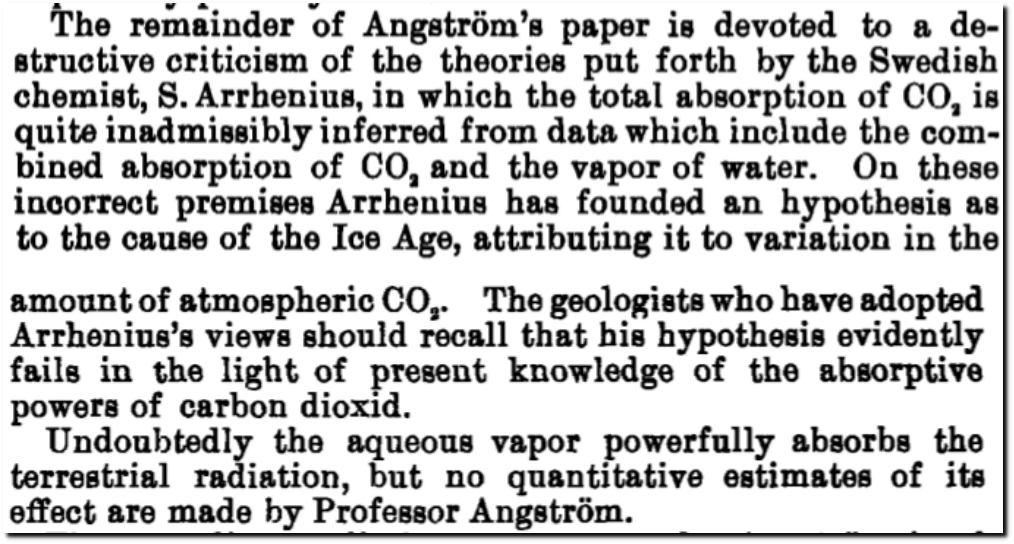 In 1941 the USDA explained why increasing levels of CO2 would not have a significant impact on the climate.

“IT WILL be news to many people that man, during his geo- logically brief existence on earth, has never known a “normal” climate. We are now at the tail end of an ice age and living in a period of crustal and climatic violence as great as any the earth has known. This is why we have to think so much about the weather. Such periods of revolution have occurred briefly several times in the history of the earth.”

“Much has been written about varying amounts of carbon dioxide in the atmosphere as a possible cause of glacial periods. The theory received a fatal blow when it was realized that carbon dioxide is very selective as to the wave lengths of radiant energy it will absorb, filtering nut only such waves as even very minute quantities of water vapor dispose of anyway. No probable Increase in atmospheric carbon dioxide could materially affect either the amount of insolation reaching the surface or the amount of terrestrial radiation lost to space.“ 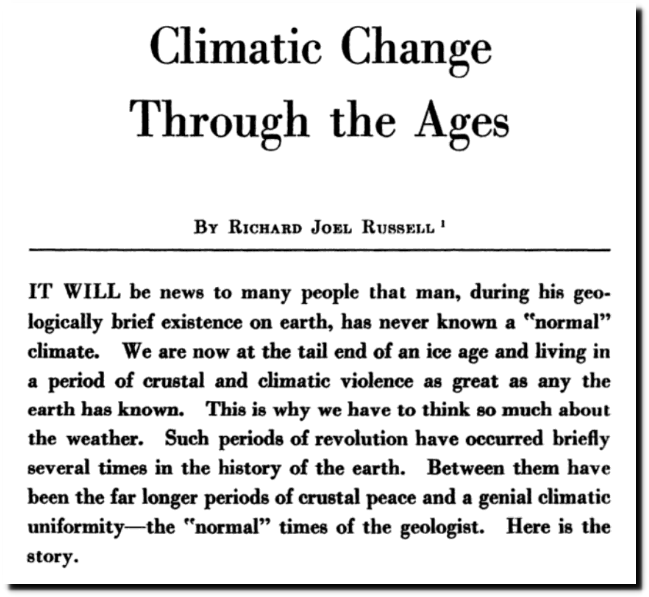 Rasool and Schneider at NASA confirmed this in 1971.

“It is found that even an increase by a factor of 8 in the amount of CO,, which is highly unlikely in the next several thousand years, will produce an increase in the surface temperature of less than 2°K”

“even an order of magnitude increase of CO, in the atmosphere by human activities, which at the present rate of input is not expected within the next several thousand years, may not be sufficient to produce a runaway greenhouse effect on Earth” 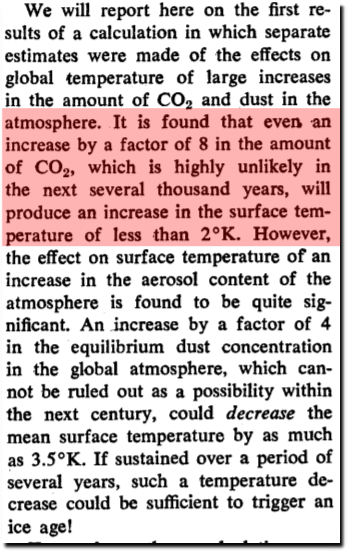 I generated this graph using the RRTM-LW model, which shows how little impact CO2 and CH4 have on earth’s radiative balance.  Even a huge increase in CO2 or CH4  has minimal impact on climate.  H2O is far and away the dominant greenhouse gas on earth. 9 Responses to Third Century Of The Same Junk Science