ABOUT 9 o clock on Wednesday afternoon the heaviest storm of the season swept over Tennessee, varying in strength and fury in different localities At ChatBarooga, and in the Cumberland Mountains torrents of rain and hail fell, again washing away the railroad trestle work at Tantallon, and leaving hailstones on the summit of Racoon Mountain near as large as hen’s eggs In some of the cuts of the mountains the truck of the Nashville and Chattanooga Railroad is a foot under water, but little or no time has been lost by the trains

The country between the Hillsboro and Murfreesboro pikes, lying within a range of twelve or thirteen miles, was desolated by the most destructive tornado known in Tennessee since a large portion of Fayetteville was laid in ruins nearly twenty years ago. The path of the hurricane seemed to be about half a mile in width, and it swept over the country amazing course, carry mg death and destruction wherever its resistless which could reach a movable object

Dwelling houses, barns, and outhouses of every description were lifted from their foundations and wrenched to fragments, killing or wounding the inmates, and burying them beneath the ruins Roofs and fence boards took flight in every direction, orchards were laid low and the proud forest trees were piled one upon another, some of them torn up by the roots, and the strong branches of others clinging to the few that stood against the tempest The telegraph line along the Nashville and Decatur rail-road was thrown down for some distance, and large oak leaves were turned upon the lesser winds as far as the southern streets of Nashville

Deep, rolling thunder, and blinding flashes of lightning, accompanied by torrents of rain, followed upon the tornado, and the scene along its route is described to have been OF grand as it was terribly destructive the groaning of the great trees clinging to their strong roots, the crash of falling buildings, the whirring and clattering of flying boards and shingles, mingled with the roar of the tempest as it swept along over the hill and hollow, and whistled spitefully about the corners of the houses and barns its limited scope barely permitted it to touch, made up a confusion of sounds that would have drowned a moving pandemonium” 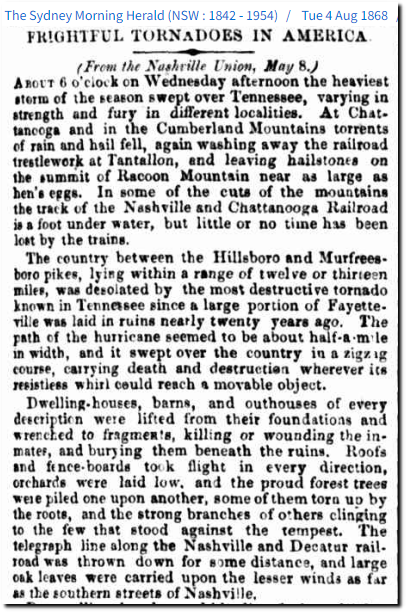