Even Application Of The Law

“The media is the most powerful entity on earth. They have the power to make the innocent guilty and to make the guilty innocent.” 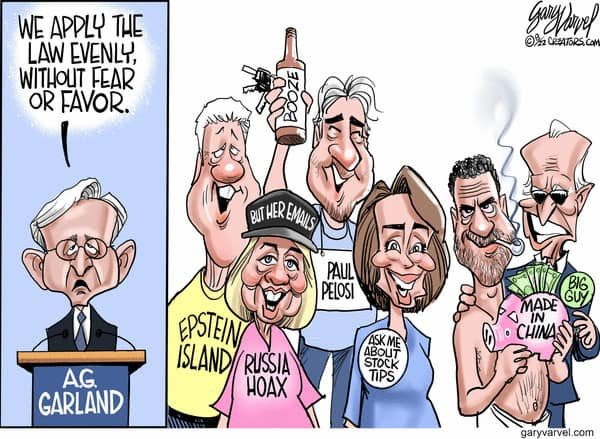 “Dear Attorney General Garland: We represent investigative journalist James O’Keefe and the not-for-profit news media company Project Veritas in defense of your Justice Department’s protracted attack on them. … You and I both know that if the New York Times gained possession of the diary of former President Trump’s adult daughter, it would have published it page-by-page for weeks on end, selectively editing the content to publish the most salacious entries in the diary, without regard to the harm it would have done to the person in question. Mr. O’Keefe and Project Veritas took an additional step that further affirmed their responsible journalism. Through an attorney, the journalists turned Ms. [Ashley] Biden’s diary and personal effects into local law enforcement in the jurisdiction in which the source had indicated the items were found. … The facts and law here lead to the inescapable conclusion that your prosecutors in the Southern District of New York have engaged in an unprecedented and politically motivated attack on the free press, without factual or legal justification, and in violation of DOJ’s regulations, guidelines, and your pronouncements. … How on earth can you allow the attack on Project Veritas and its journalists to continue, and avoid being fairly tagged as a partisan, political hypocrite who wields your power in defense of an adult child of the President? There appears to be no adult supervision in the U.S. attorney’s office for the Southern District of New York. It is for you to decide whether to allow your prosecutors to continue to set dangerous precedent, gut First Amendment protections, and facilitate the decline of a free and independent press, or to put your money where your mouth is, demonstrate that your memorandum was not a petty political ploy aimed at the prior administration, and terminate this abhorrent action that threatens a free and independent press.”

“These are dark times for our Nation, as my beautiful home, Mar-a-Lago in Palm Beach, Florida, was raided, and occupied by a large group of FBI agents.

Nothing like this has ever happened to a President of the United States before, and it’s important that you know that it wasn’t just my home that was violated – it was the home of every patriotic American who I have been fighting for since that iconic moment I came down the Golden Escalators in 2015.

I stood up to the Radical Left’s corruption. I restored power to the people and truly delivered for our Country like we have never seen before. The establishment hated it.

Now, as they watch my endorsed candidates win big victories and see my dominance in all polls, they are trying to stop the Republican Party and me once more. The lawlessness, political persecution, and Witch Hunt, must be exposed and stopped.”

2 Responses to Even Application Of The Law