Hurricane Naming Season Is Getting Longer

Experts say the hurricane season is getting longer due to climate change, and they want to start naming more storms. Actual data shows that hurricane season is getting shorter. June hurricanes in the US used to be fairly common, but there haven’t been any US June hurricane landfalls for 35 years. In 1886, the US was hit by three hurricanes during June. 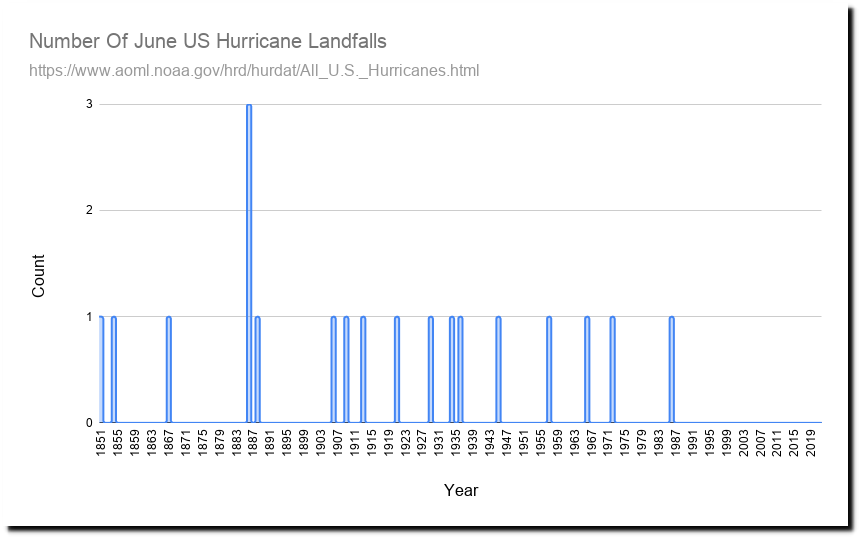 In 1955, there was a hurricane during January. And in 1493, Christopher Columbus was nearly killed by a February hurricane.

What is actually happening is that academics and government agencies are rewarded for producing confirmation bias of global warming. Chris Landsea is the Science and Operations Officer at the National Hurricane Center. 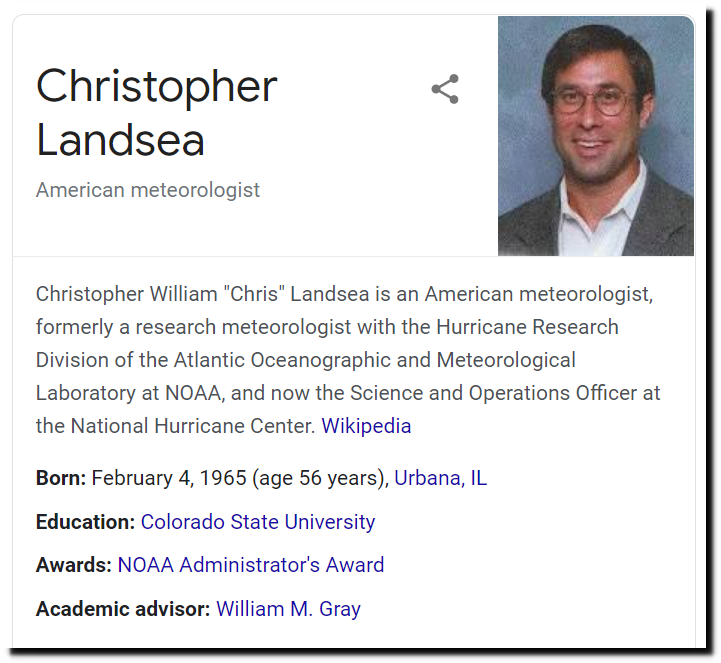 He explained that the reason people think there are more storms, is because we have much more monitoring in the Mid-Atlantic than we used to, so more storms are found.  Many storms were missed in the past before the satellite and trans-Atlantic plane travel. In 2005, he quit the IPCC because the hurricane “science” was pre-determined and politicized.

This is an open letter to the community from Chris Landsea.

After some prolonged deliberation, I have decided to withdraw from participating in the Fourth Assessment Report of the Intergovernmental Panel on Climate Change (IPCC). I am withdrawing because I have come to view the part of the IPCC to which my expertise is relevant as having become politicized. In addition, when I have raised my concerns to the IPCC leadership, their response was simply to dismiss my concerns.

With this open letter to the community, I wish to explain the basis for my decision and bring awareness to what I view as a problem in the IPCC process. The IPCC is a group of climate researchers from around the world that every few years summarize how climate is changing and how it may be altered in the future due to manmade global warming. I had served both as an author for the Observations chapter and a Reviewer for the 2nd Assessment Report in 1995 and the 3rd Assessment Report in 2001, primarily on the topic of tropical cyclones (hurricanes and typhoons). My work on hurricanes, and tropical cyclones more generally, has been widely cited by the IPCC. For the upcoming AR4, I was asked several weeks ago by the Observations chapter Lead Author – Dr. Kevin Trenberth – to provide the writeup for Atlantic hurricanes. As I had in the past, I agreed to assist the IPCC in what I thought was to be an important, and politically-neutral determination of what is happening with our climate. His college mentor was my good friend Dr. Bill Gray, who passed away five years ago. Dr. Gray was the leading tropical meteorology expert in the world, and the inventor of modern hurricane forecasting. Bill had his funding cut off by VP Al Gore in 1993, and never got another penny out of the government – because (unlike most of his colleagues) he refused to trade his integrity for government funding. 17 Responses to Hurricane Naming Season Is Getting Longer