UNLESS there is an unexpected increase in rainfall, and some means is devised of checking the ravages of rabbits, thousands of square miles of country in Central Australia, Western Queensland, and New South Wales will be abandoned, according to Mr. S. D. Reid, manager for Sir Sidney Kidman, after a 4,000-mile tour of Sir Sidney’s properties in these areas. Mr. Reid said that practically all the properties he visited were suffering severely from drought. Along the Cooper and in the north-western corner of New South Wales the drought had been almost unbroken since 1931.” Wheat Imports May Be Necessary

The effect of the mid-western dust storms became virtually nation-wide today, when a thin haze was noted over New York, while vast clouds of dust are being swept from the Pan-handle section of Texas across the New Mexico and Arizona, threatening the gardens of Imperial Valley, California, which hitherto was immune. From Kansas City, which is the centre of the eroded area producing the dust storms, a report declares that there is a temporary calm, giving planters a chance to “dig out,” but there is no immediate hope of rain, which is necessary to bind the loosened top soil, and the swirling dust clouds may start again at any moment. From Clayton, New Mexico, the United Press correspondent reported to-day that a wall of dust “at least 10,000 feet high” struck the area. Propelled by a gale, it advanced with ‘the speed of a high-powered motor car.” The correspondent added:— ‘When it struck I was unable to see my hand before my face. The whole area was buried in soil, while drifts of dust against barns and houses rose to a height of two to three feet. Roadways were obliterated.’

Drought conditions on the Great Western Plains are reported by the Department of Agriculture to have been even worse on April 1 than on a similar date in 1934, and unless there is an improvement the United States may be forced to import wheat in the coming winter.”

It is estimated that between 5.000.000 a lid 6,000.000 sheep are bleaching in the dry creeks and plains between Charleville, Tambo. Blackwell, Longreach, Barkleline, Winston and Hughenden owing to the drought. This is Queensland’s greatest setback in the history of her pastoral industry.” 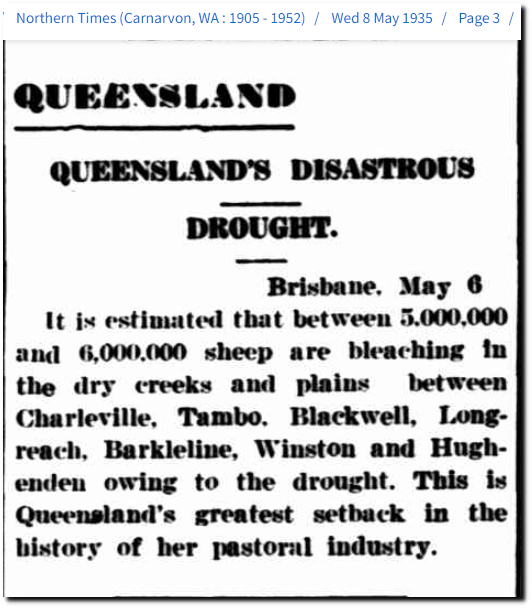 A state of public* calamity was proclaimed yesterday after five consecutive days of unprecedented wind and rain storms. It is believed that 60 persons have been killed, while unofficial estimates run as high as 400. For the whole district over !,000 persons are homeless. Five hundred buildings have been demolished, including some of the finest architectural treasures. Repeated landslides on the mountainside above the city have occurred. The lower part of the city is flooded.”