A tornado outbreak on May 24, 1896 killed dozens of people in Iowa, Illinois and Kansas. 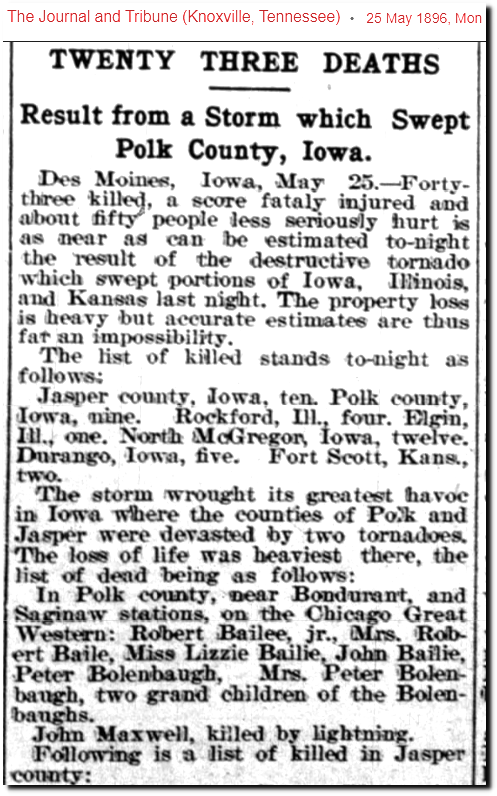 This week of almost continuous strong and violent tornado activity (perhaps the most violent single week of tornado activity in US history) continued with a 1 AM, F4 tornado in Ogle County, Illinois. A mother and three children died as a home was leveled south of Egan. A half hour later, three more died and six were injured in a home south of Davis Junction, Illinois. The late afternoon devastated parts of central and eastern Michigan. At 6 PM, in Tuscola County, Michigan, a home in which a funeral was taking place was destroyed. The thirty people in attendance ran safely to a ditch before the home was “lifted and dashed to the ground.” A man in a nearby home was killed by debris as he watched the events from his window. Two hours later, two people were killed as thirty homes were destroyed at Mount Clemons, Michigan. At 9 PM, the third F5 tornado of the year began leveling homes near Ortonville, Oakwood, and Thomas, Michigan. Nine people died in a single home at Ortonville. On the ground for thirty miles, the funnel killed at least forty-seven people.”

Tornadoes in the Past