On May 25, 1896 tornadoes and floods killed around 100 people in Michigan, Iowa and Illinois.

“May 25, 1896
This week of almost continuous strong and violent tornado activity (perhaps the most violent single week of tornado activity in US history) continued with a 1 AM, F4 tornado in Ogle County, Illinois. A mother and three children died as a home was leveled south of Egan. A half hour later, three more died and six were injured in a home south of Davis Junction, Illinois. The late afternoon devastated parts of central and eastern Michigan. At 6 PM, in Tuscola County, Michigan, a home in which a funeral was taking place was destroyed. The thirty people in attendance ran safely to a ditch before the home was “lifted and dashed to the ground.” A man in a nearby home was killed by debris as he watched the events from his window. Two hours later, two people were killed as thirty homes were destroyed at Mount Clemons, Michigan. At 9 PM, the third F5 tornado of the year began leveling homes near Ortonville, Oakwood, and Thomas, Michigan. Nine people died in a single home at Ortonville. On the ground for thirty miles, the funnel killed at least forty-seven people.”

Tornadoes in the Past 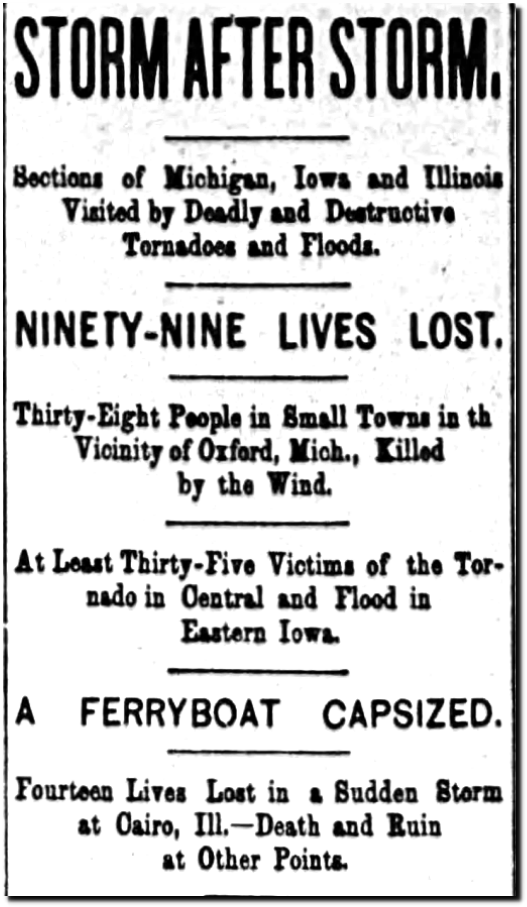 History of tornadoes in Oakland County, Michigan – The Oakland Press

“Late during the evening hours of May 25, an F5 tornado touched down in Eastern Michigan and moved northeast for about 30 miles (48 km).[6] The tornado affected portions of Oakland, Lapeer and Livingston Counties northwest of Detroit. Towns affected included Thomas, Ortonville, Oakwood, and Whigville just after 9:00 pm. Homes were leveled or swept away, and fatalities occurred along the path. Entire farms were leveled, and debris from homes was found up to 12 miles (19 km) away. Trees were completely debarked along the path as well, with even small twigs stripped bare in some cases. Homes were swept away in Thomas, including one that was obliterated with the debris scattered up to 10 miles away. A piano from that residence was found 200 yards away from the foundation, with one end “pounded full of grass”. Weather Bureau inspectors reported that grass in the center-most part of the circulation was “pounded down into the earth, as if it had been washed into the earth by a heavy flow of water.”[15] At least 100 people were injured.[6] With 47 deaths, this is the second-deadliest tornado ever in Michigan trailing only the Flint Tornado of 1953 which killed 116 in Genesee County just outside Flint. Twenty-two people were killed in Ortonville, ten in Oakwood, three in Thomas, four north of Oxford and three in Whigville with others in rural areas. Nine of the fatalities were in a single home in Ortonville.[16][17] Other killer tornadoes on that day touched down in Ogle County, Illinois (two different tornadoes) and Macomb & Tuscola Counties in Michigan. Several homes and farms in the Mount Clemens area were wiped out and others were moved from their foundations. The recently completed Colonial Hotel was leveled. Thirty homes were leveled in total, and two people were killed.”

Tornado outbreak sequence of May 1896 – Wikipedia