Worldwide Heatwave And Drought of 1540

This article was written during the record heatwave and drought of July, 1901 which was the second hottest July since 1895 in the US.

“FERVENT PRAYERS FOR RAIN ARE OFFERED IN MISSOURI.

Third Time in State’s History That Such Appeals Have Been Made— Churches of All Denominations Observe the Governor’s Proclamation, and Those Who Pray Believe That Their Petitions Will Be Answered.

Prayers for rain ascended from the altars of most places of worship in St. Louis at Sunday services. In this manner the proclamation of Governor Dockery, calling on the’ people of the Commonwealth to observe yesterday as a time of petition for relief from the drought was generally observed.

It was the third time in the history of Missouri that divine intervention had been sought to avert distress. The great drought of 1540 made the Indian tribes of the Mississippi Valley call on De Soto, the explorer, to intercede with his God that they might not perish from starvation,

History relates that rain descended in- torrents the night after the Spanish adventurer reared his cross ‘on the banks of the Father of Waters and prayed for the end of the drought.

Again, in 1874, Missouri was visited by devastating heat on this occasion. ‘Governor Hardin was besought to issue a proclamation calling the people to prayer. History repeated itself once more. Rain fell a few days after the petition to the Infinite, and the crops were saved.

Ministers of the gospel of the modern day who. have followed the example of the explorer are confident that history will repeat itself. They unite in asserting the efficacy of prayer. Rain that extinguished the fierce heat of 1540 is expected hourly to drench the parched pastures. “For eleven months there was almost no rain, the temperature was five to seven degrees above the normal values ​​of the 20th century, the temperature must have climbed above 40 degrees in midsummer. Countless forest areas in Europe went up in flames, acrid smoke obscured the sunlight, and not a single thunderstorm was recorded for the entire summer of 1540. As early as May, water was running out, wells and springs dried up, mills stood still, people starved, cattle were slaughtered. An estimated one million people died in Europe that year, mostly from dysentery.

It all started in northern Italy, with a winter that felt like July. Not a drop fell from October 1539 to early April 1540. Then drought spread to the north. A cold snap brought a sunny but probably hypothermic late winter here on land – similar to this year. A source reports cold winds and ice in the morning. But it must have been very warm during the day. The spring was then sunny and completely dry, between February and 29 September it didn’t rain a day or a night, according to the Zurich reformer Heinrich Bullinger.

At the beginning of June it got so unbearably hot that even stone carvers in Besancon got the day off. But that was just the beginning. July brought such a terrible scorching heat that the churches sent out prayers of supplication while the Rhine, Elbe and Seine could be waded through without getting wet. Where water still flowed, the warm broth turned green, and fish floated in it keel up. The level of Lake Constance dropped to a record level, and Lindau was even connected to the mainland. The surface water soon evaporated completely, the floors burst open, some drying cracks were so large that a foot could fit in them.

And the groundwater dropped too: in the Swiss canton of Lucerne, desperate people tried to dig for water in a river bed, but found not a single drop even at a depth of one and a half meters. Christian Pfister therefore estimates that only a quarter to a maximum of a third of the usual amount of rain came from the sky that year. It is fitting that chroniclers from western Russia reported flash floods, high water and cold that year. Summer just fell out there.

The harvest began unusually early for this. The first grapes were already ripe on August 12th, in Alsace the fruit trees were soon in bloom again, in Lindau there was even enough time for a second cherry harvest. Wine was eventually cheaper than water on Lake Constance and in Bayreuth, and in Limoges winegrowers harvested roasted grapes from which they made sherry-like wine that got drunk very quickly. In Würzburg, the winegrowers had an idea: they pressed the half-dried grapes and invented the late harvest. This millennium wine has been stored from 1540 to the present day in the Bürgerspital zum Heiligen Geist.”

“Reconstructions based on documentary data indicate that the summers of 1531–1540 constitute the driest summer decade in central Europe for the past five centuries, between 1501 and 2010 CE.” 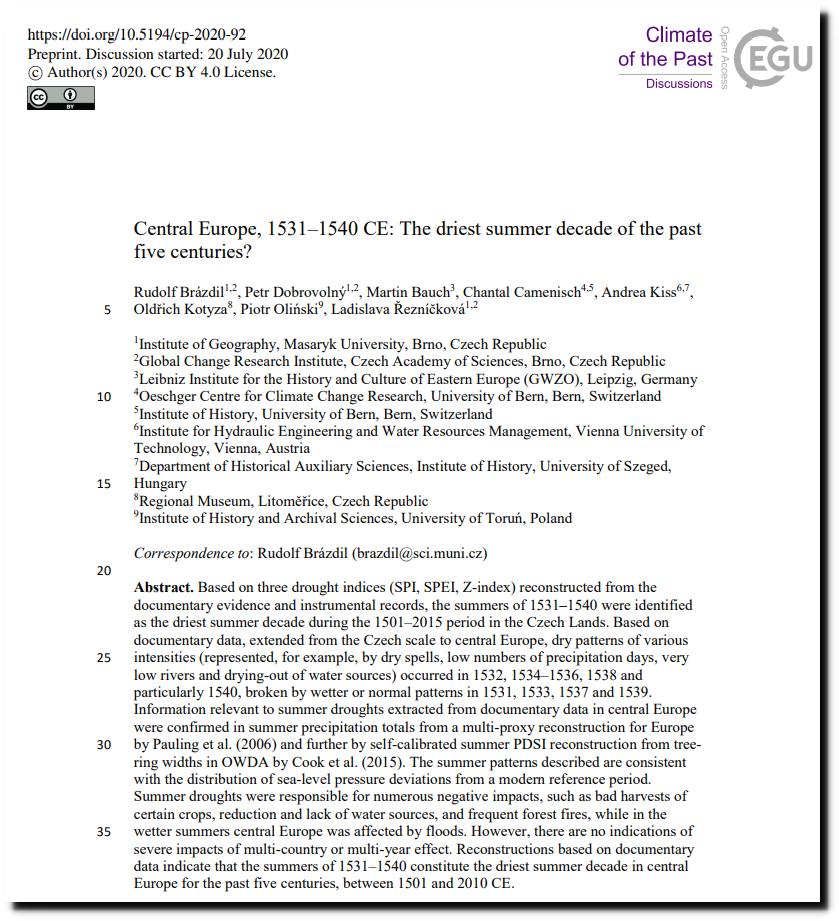 “we investigated the severity of the 1540 drought by putting forward the argument of the known soil desiccation-temperature feedback. Based on more than 300 first-hand documentary weather report sources originating from an area of 2 to 3 million km2, we show that Europe was affected by an unprecedented 11-month-long Megadrought. The estimated number of precipitation days and precipitation amount for Central and Western Europe in 1540 is significantly lower than the 100-year minima of the instrumental measurement period for spring, summer and autumn. This result is supported by independent documentary evidence about extremely low river flows and Europe-wide wild-, forest- and settlement fires. We found that an event of this severity cannot be simulated by state-of-the-art climate models.” 8 Responses to Worldwide Heatwave And Drought of 1540