Experts now say the Maldives will be underwater and run out of fresh water within decades.

Most low-lying atoll islands are likely to become uninhabitable by the middle of the century, according to a new study.

Scientists predict that as sea levels rise, thousands of islands will be afflicted by frequent flooding, lack of freshwater and damage to infrastructure. The difference between now and 200 years ago, is that scientists 200 years ago actually knew something about science. They were aware in 1837 that coral reefs are dynamic and come and go on their own.

The natives observe the atolls to be wasting away; in some the cocoanut trees are standing in the water ; in another the black soil of the island is discernible at low water thirty feet from the beach ; the south-east side of an island in Phaidee Pholo Atoll is entirely gone, but is marked by a banyan tree in the water. They say that some islands have disappeared entirely.

Some of the outer edges of the islands have fallen into the sea, which is fathomless in those parts. It is, however, acknowledged that reefs, have arisen from the water and gradually formed islands ; and the inhabitants of Male remember the outer edge of a circular reef in their harbour to have had two fathoms in the shoalest part, which is now dry at low water.’ 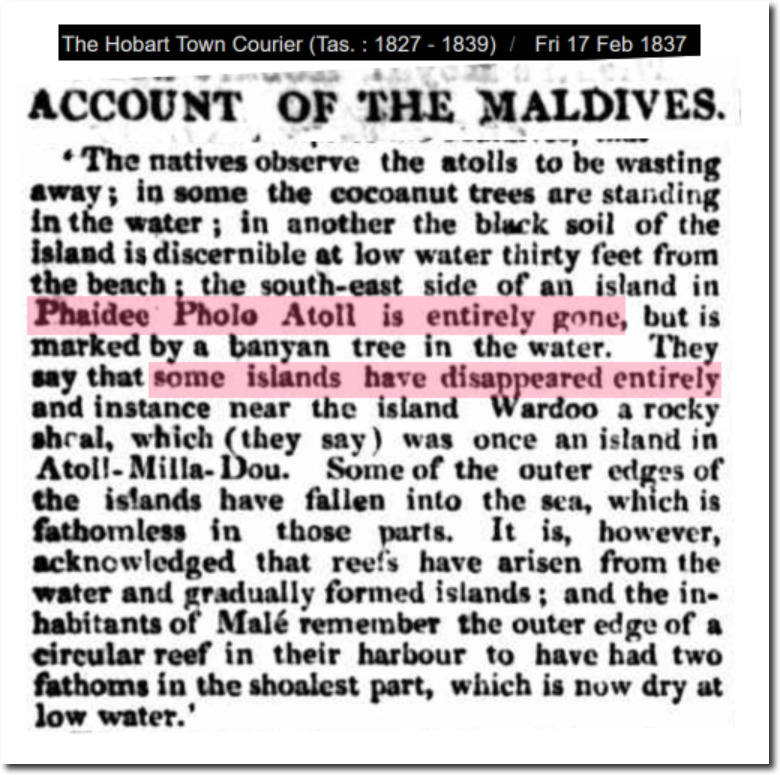