In year 2000, climate scientists predicted the demise of Arctic sea ice and said sea ice thickness had declined 92% since the late 1950s from 10.2 feet to 5.9 feet.

“the receding and thinning of Arctic sea ice have outstripped the theoretical effect of global warming from greenhouse gases by a factor of three.”

“As for average ice thickness in late summer, submarine sonar measurements since the 1950’s have shown a decline to 5.9 feet from 10.2 feet, or 42 percent. ”

“Dr. Drew Rothrock, a University of Washington oceanographer, said he agreed that Arctic sea ice was on a trajectory to disappear in 50 years. But, he added, that did not mean it would. The ice is being expelled from the Arctic by abnormally strong winds before it could achieve its accustomed thickness, he said, and that could be a temporary phenomenon.

”I think it is quite possible that in the next 10 years we will see the winds revert to a more historical pattern, so that the ice begins to reside longer in the Arctic and thicken up again,” he said. ”I would be cautious about predicting doom.” 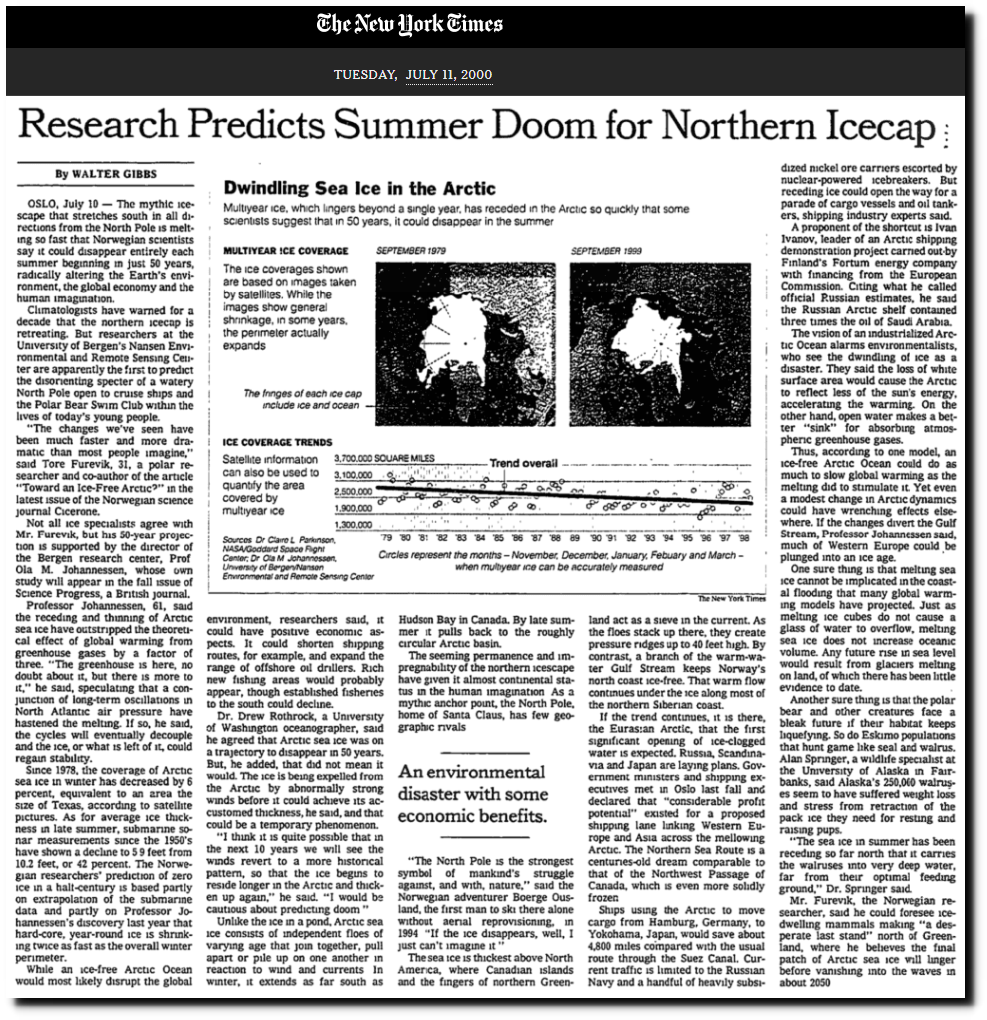 Ignoring the fact they lack primary school math skills, their statistics are also fake. During the late 1950s submarines reported that the ice was seven feet thick – not ten feet.

“SUNDAY, OCTOBER 19, 1958
The Changing Face of the Arctic Some scientists estimate that the polar ice pack is 40 per cent thinner and 12 per cent less in area than it was a half-century ago, and that even within the lifetime of our children the Arctic Ocean may open, enabling ships to sail over the North Pole, as the submarines Nautilus and Skate recent-ly sailed under it. A ship bound from New York to Tokyo would save 2,500 Although the idea that a solid ice sheet covers the central Arctic has lingered stubbornly in the popular fancy, the northern cap of ice worn by our planet is actually a thin crust—on the whole, only about seven feet thick—over an ocean two miles deep in places.” Sea ice extent loss from May 1 to May 13 has been third lowest on record.