Latest From The British Press

My best friend from high school in England (50 years ago) just sent this over. The press imagines that England’s coasts will be underwater soon. 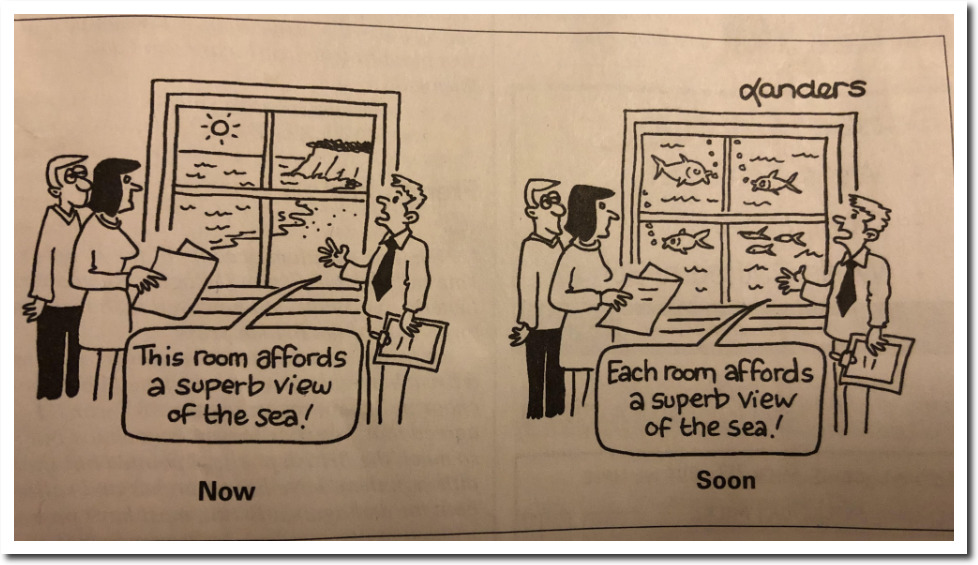 This is what the East Sussex coast looked like 1,700 years ago when Romans built a castle at Pevensey Bay. The water formed a natural moat around the most of the castle.

The castle is now a mile away from the ocean, and the bay is farmland. aerial photograph of Pevensey Castle East Sussex, England UK. Originally built in 290 AD by the Romans as a “Saxon Shore Fort to defend against seaborne Saxon raids. In Roman times the fort was known as Anderitum it was garisoned until the Romans left Britain in 410 AD, after which it was occupied by local Britons. In 471 AD the fort was taken in a Saxon raid and all the occupants slaughtered. In 1066 William the Conqueror landed hois invading forces at nearby Pevensey bay and camped within the Roman Walls before marching on to the Battle of Hastings and eventual conquest of all England. Immediately after the Norman Conquest , William had the site refortified with a Norman Keep being constructed within the Roman Curtain Wall. Alterations and improvements continued to be made throughout the medieval period. The Castle was besieged during the Rebellion of 1088 with the occupants eventually surrendering after 6 weeks due to lack of food. The castle was again besieged during the Second Barons War when Simon De Montofd besieged the loyalists foreces within the castle. The fared better than the previous siege as they were able to receive supplies by ship and help against the sige for a year. The castle faced its last siege in 1399 when it was held by forces loyal to Henry Bolingbroke, later Henry IV during his rebellion to over throw Ricahrd II.After that the castle fell into ruin, although it was temporarily garrisoned with arterially crews in 1587 when England faced the Spanish Armada. The Castle was again refortified during the second world war with anti tank defences and machine gun positions built into the walls. While some of these defences were removed after the war, some have been retained as a memorial to the last stage in this castles military history.

People are so worried about sea level rise, that you can now buy a house on the south coast for an average price of only one million dollars. 2 Responses to Latest From The British Press