In 1986, NASA’s James Hansen made some projections about how global warming was going to affect eight cities.

Mintzer distributed a chart showing a 1986 projection made by NASA climatologists of the likely impact of global warming on eight major U.S. cities in the year 2030. 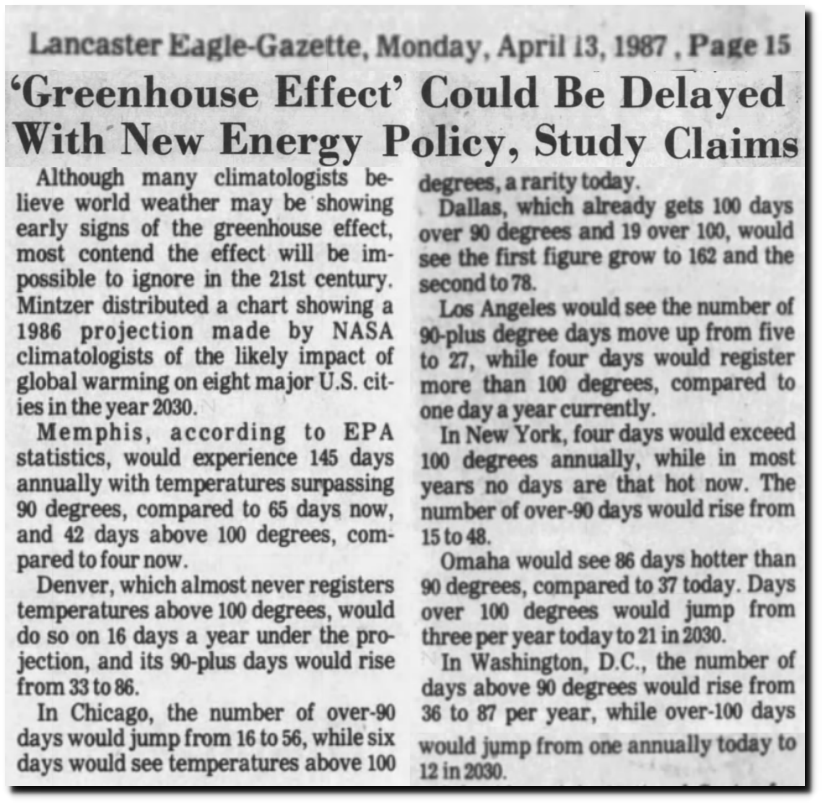 Let’s see how he did.

Memphis, according to EPA statistics, would experience 145 days annually with temperatures surpassing 90 degrees, compared to 65 days now, and 42 days above 100 degrees, com-pared to four now.

Covington is the closest Tennessee USHCN station to Memphis. The frequency of 90 and 100 degree days has plummeted.

Denver, which almost never registers temperatures above 100 degrees, would do so on 16 days a year under the projection, and its 90-phis days would rise from 33 to 86.

Boulder is the closest USHCN station to Denver.There has been no trend over the past 65 years, and it almost never gets above 100 degrees.

In Chicago, the number of over-90 days would jump from 16 to 56, while six days would see temperatures above 100 degrees, a rarity today.

Aurora is the closest USHCN station to Chicago, and the frequency of 90 and 100 degrees days has dropped sharply since the 1930s.

Weatherford is the closest USHCN station to Dallas, and the number of 90 and 100 degree days has dropped sharply.

Los Angeles would see the number of 90-plus degree days move up from five to 27, while four days would register more than 100 degrees, compared to one day a year currently.

Downtown LA is much hotter than those numbers, so I assume he meant the airport. The closest USHCN station to LAX is Newport Beach, which shows no trend in hot days.

In New York, four days would exceed 100 degrees annually, while in most years no days are that hot now. The number of over-90 days would rise from 15 to 48.

The frequency of hot days at New York City has dropped sharply since Hansen made his forecasts in 1986.

One hundred degree days in New York peaked in the 1950’s, so the Orwellian New York Times has tried to erase them.

The closest USHCN station to Omaha is at Ashland, and the number of hot days has plummeted to record lows.

Purcellville is the closest Virginia USHCN station to Washington D.C., and the number of hot days there has plummeted. I used to live across the river in Maryland, and never needed air conditioning.

Hansen was wrong, because his CO2 climate model was based on superstition rather than science. But undaunted by their past failures, the New York Times continues to push the same nonsense. “How Much Hotter Is Your Hometown Than When You Were Born? In most professions there are consequences for being wrong, but not if you are employed by the climate religion – where facts simply don’t matter. There is no possible way for you to be wrong.