“Oslo A remarkable thinning out of the polar ice cap in the Antarctic is reported by a Norwegian expedition which found bare stretches of earth on an island thickly covered with ice only 20 years ago.

Holgersen said observations on Peter I island showed that many glaciers had been considerably reduced since 1929. Many places which were covered with snow and ice at that time are now bare. “ 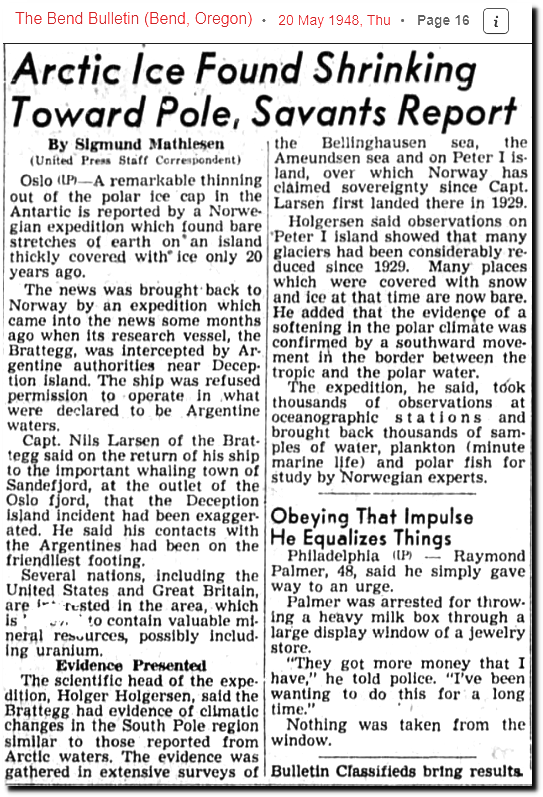 SOME great world change is taking place on the Antarctic Continent. Its glaciers are shrinking. Commander L.A. Bernacchi, who visited the South Polar land 30 years ago, says that the Great Ice Barrier which fronts the continent with a wall of ice for 250 miles has receded at least 30 miles since it was first seen and surveyed.

Sir James Ross, who went out on the earliest Antarctic expedition of the nineteenth century, and those who followed him, left clear descriptions of this tremendous ice frontage and its position. It was a cliff 150ft. high and 1000ft. thick. But now it appears to be continuing its century-long process of shrinking; and that process may have been going on for centuries. It might imply, unless it is offset by some increase of ice in another less explored part of the Antarctic, that the climate of the South Pole is changing and becoming warmer.

The shrinkage of the Alpine glaciers of Europe is a well-known and carefully measured fact. Professor Buchanan, of Edinburgh, drew attention to it twenty years ago, and showed from old and accurate drawings of the Lower Orindelwald, the Rhone, and the Morteratcch glaciers that they were retreating rapidly. ” 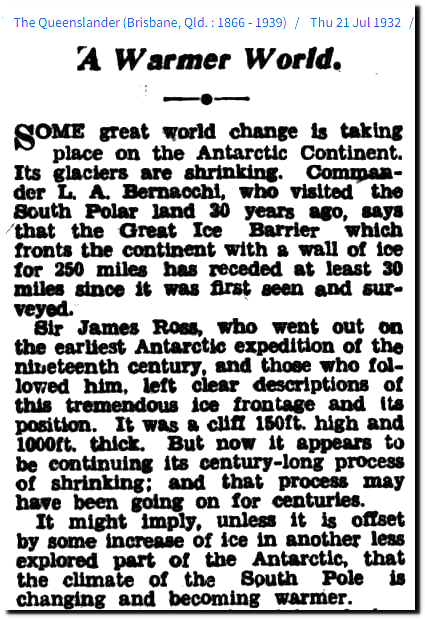