The same people who have been corrupting temperature data, erasing it, overwriting it, and pushing the biggest scientific scam in history, now say they are trying to protect the data from President Trump. 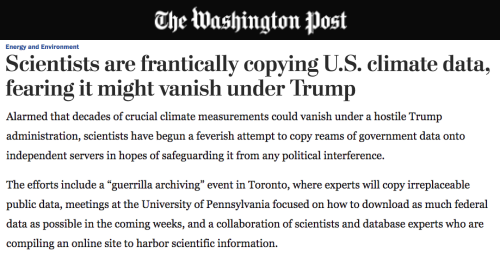 NOAA overwrites their monthly temperature data, and wanted $260,000 to recover data which should have been downloadable online in a matter of seconds

I’ve been meeting with the Trump transition team this week in Washington discussing how to protect the data which the criminals in the climate mafia have been destroying.

“Data storage availability in the 1980s meant that we were not able to keep the multiple sources for some sites, only the station series after adjustment for homogeneity issues. We, therefore, do not hold the original raw data but only the value-added (i.e. quality controlled and homogenized) data.”

42 Responses to Another Orwellian Climate Moment