NASA appears to have pulled all the stops on their climate fraud. Today’s effort is a real gem.

A new NASA study published in the journal Science discusses how researchers discovered that the Zachariae Isstrom glacier had become unstable and broken off in 2012. The Zachariae Isstrom glacier is now melting at a rate of five billion tons every year, which can be quite devastating since the glacier holds about five percent of the Greenland ice sheet, or about 35,440 square miles.

Greenland has gained 200 billion tons of new snow since September 1, and has had a half dozen days in the last two months where more than five billion tons of snow accumulated on Greenland in a single day.

“North Greenland glaciers are changing rapidly,” said Jeremie Mouginot, an assistant researcher in the Department of Earth System Science at the University of California, Irvine. “The shape and dynamics of Zachariae Isstrom have changed dramatically over the last few years. The glacier is now breaking up and calving high volumes of icebergs into the ocean, which will result in rising sea levels for decades to come.”

Sea level has been rising for the past 20,000 years. It is quite certain that it will continue to rise for the next few decades.There were high volumes of icebergs in 1912 which sank the Titanic during NASA’s coldest year ever.

The warming of the oceans is believed to be a major factor in why the Zachariae Isstrom glacier is melting. The bottom of the giant glacier is being rapidly eroded by a mixture of melt water from Greenland’s ice sheet and the warmer ocean water.

At the same time, Eric Rignot, Chancellor’s Professor of Earth system science at UCI, and Joint Faculty Appointee at JPL, says the Zachariae Isstrom glacier’s ice on top is also melting. While the underside is being eroded by the ocean, the topside is melting away due to increasing air temperatures in this region of Earth.

Greenland goes through warming and cooling cycles. Eastern Greenland was just as warm in the 1930’s through the 1950’s – when CO2 was much lower. 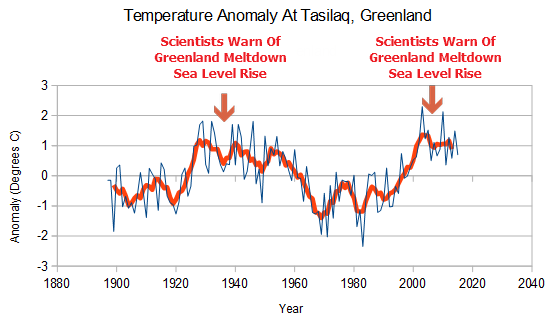 In 1939, scientists were making exactly the same claims, but after 1950 temperatures there plummeted. 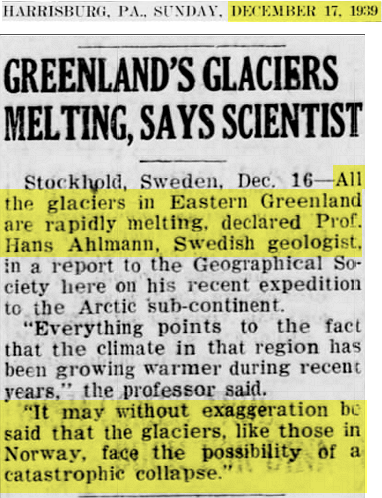 It has nothing to do with global warming. The Atlantic Multidecadal Oscillation controls Greenland temperatures. NASA knows this perfectly well and is simply committing fraud. 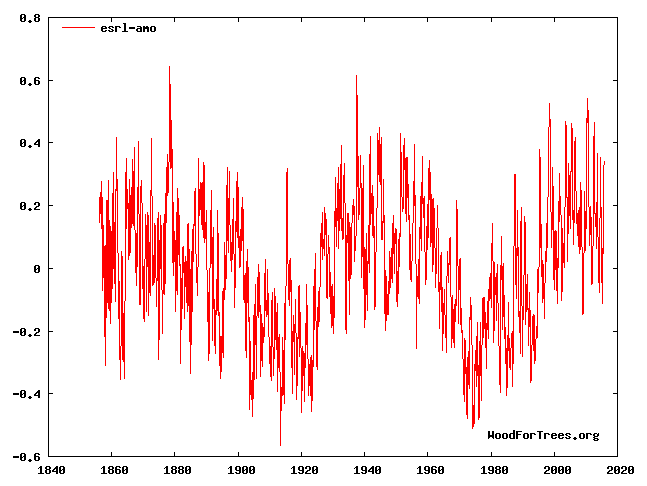 5 Responses to A More Detailed Look At NASA Greenland Fraud