The Other Half Of The Big Antarctica Lie

Posted on November 3, 2015 by tonyheller

This is big. Bookmark it.

“It has nothing to do with climate”

Last week, NASA announced that the IPCC is wrong about East Antarctica, which is gaining ice, not losing it.

A new NASA study says that an increase in Antarctic snow accumulation that began 10,000 years ago is currently adding enough ice to the continent to outweigh the increased losses from its thinning glaciers.

The research challenges the conclusions of other studies, including the Intergovernmental Panel on Climate Change’s (IPCC) 2013 report, which says that Antarctica is overall losing land ice.

“Our main disagreement is for East Antarctica and the interior of West Antarctica – there, we see an ice gain that exceeds the losses in the other areas.”  Zwally added that his team “measured small height changes over large areas, as well as the large changes observed over smaller areas.

It didn’t require millions of dollars to figure this out. Researchers in East Antarctica have known for decades that they are gaining ice. The fact the IPCC (and John Cook) didn’t know, is a smoking gun of extreme incompetence and corruption. 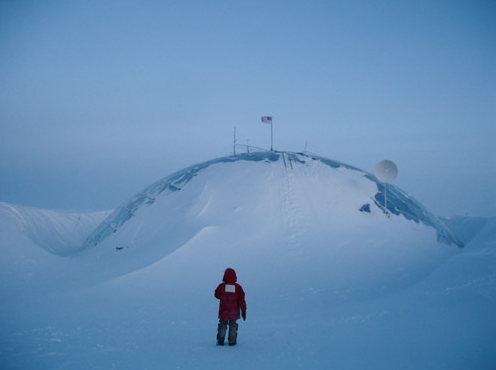 But the fraud is much worse than it seems. The claimed “collapse of the west Antarctic Ice Sheet was occurring during the cold 1970’s, and scientists knew that it had nothing to do with climate.

“We’re seeing the west ice sheet on its way out. It has nothing to do with climate, just the dynamics of unstable ice.”
– Dr. Richard Cameron
NSF Program Manager for Glaciology 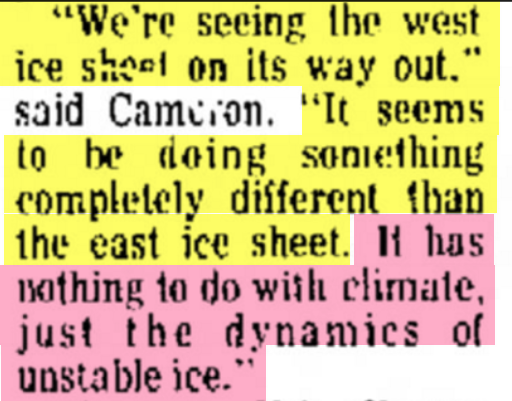 This story of Antarctic fraud gets much worse though. The Ross Ice Shelf in West Antarctica has been rapidly retreating more than four feet per day since at least 1830, and possibly for centuries. It has nothing to do with CO2, and there is nothing anyone can do to stop it.

But just when you think this story of fraud and corruption at the IPCC can’t get any worse, it does. Eight years ago, the IPCC knew that Antarctica was gaining ice.

They changed their story in 2013 under extreme pressure from governments, which cut almost all of the scientists out of the process. 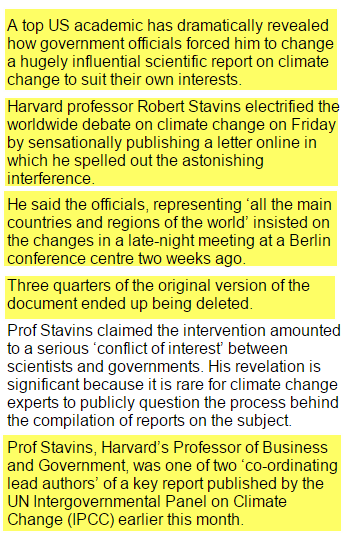 You can’t make this stuff up. it is straight out of Orwell’s 1984. Only worse.

11 Responses to The Other Half Of The Big Antarctica Lie