This is a huge story.  We are closing the noose on NASA climate fraud.

The Canberra Times has an article today attacking Senator Roberts over a letter he sent questioning the adjustments NASA (i.e. GHCN) has made in Iceland. Senator Roberts asked Gavin to explain his adjustments, and Gavin responded with an insult. Totally unacceptable behavior for a public servant. 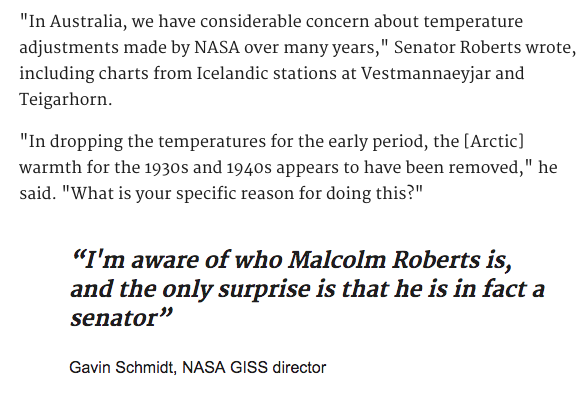 The article quoted Truasti Jónsson saying the adjustments were all good.

From: Trausti Jónsson
To: paul homewood
Cc: Halldór Björnsson
Sent: Monday, 23 January 2012, 17:40
Subject: Re: monthly temperatures
Hi Paul.
We have sent a questions to the GHCN database regarding this and they will look into the problem. Regarding your questions:
a) Were the Iceland Met Office aware that these adjustments are being made?
No we were not aware of this.
b) Has the Met Office been advised of the reasons for them?
No, but we are asking for the reasons
c) Does the Met Office accept that their own temperature data is in error, and that the corrections applied by GHCN are both valid and of the correct value? If so, why?
The GHCN “corrections” are grossly in error in the case of Reykjavik but not quite as bad for the other stations. But we will have a better look. We do not accept these “corrections”.
d) Does the Met Office intend to modify their own temperature records in line with GHCN?
No.

No changes have been made in the Stykkisholmur series since about 1970, the Reykjavík and Akureyri series that I sent you have been slightly adjusted for major relocations and changes in observing hours. Because of the observing hour changes, values that where published before 1924 in Reykjavík and before 1928 in Akureyri  are not compatible with the later calculation practices. For other stations in Iceland values published before 1956 are incompatible with later values except at stations that observed 8 times per day (but the differences are usually small). The linked paper outlines these problems (in English):Climatological1960.pdf

The monthly publication Vedrattan 1924 to 1997 (in Icelandic) is available at:
http://timarit.is/view_page_init.jsp?pubId=278&lang=is&navsel=666

and earlier data (in Icelandic and Danish – with a summary in French) at:
http://timarit.is/view_page_init.jsp?pubId=240&lang=is&navsel=666

Monthly data from all stations from 1961 onwards :
http://www.vedur.is/Medaltalstoflur-txt/Manadargildi.html

Originally Posted at : Another GISS miss, this time in Iceland | Watts Up With That?

In a 2015 article by Cristopher Booker at the UK Telegraph, Jónsson was amazed to see how GHCN had made the cold of the 1970’s disappear in Iceland.

Homewood has now turned his attention to the weather stations across much of the Arctic, between Canada (51 degrees W) and the heart of Siberia (87 degrees E). Again, in nearly every case, the same one-way adjustments have been made, to show warming up to 1 degree C or more higher than was indicated by the data that was actually recorded. This has surprised no one more than Traust Jonsson, who was long in charge of climate research for the Iceland met office (and with whom Homewood has been in touch). Jonsson was amazed to see how the new version completely “disappears” Iceland’s “sea ice years” around 1970, when a period of extreme cooling almost devastated his country’s economy.

The graph below shows how NASA altered the data at Reykjavik in 2014, as captured by Paul Homewood.

Trausti appears to have “changed his mind” about this, just like Chief Justice Roberts and Director Comey did.

The 1930’s-1940’s were very warm in that region, from Eastern Greenland to Norway. The glaciers of Eastern Greenland and Norway were melting very quickly and faced the possibility of catastrophic collapse. It was clearly much warmer in 1939 than it is now. 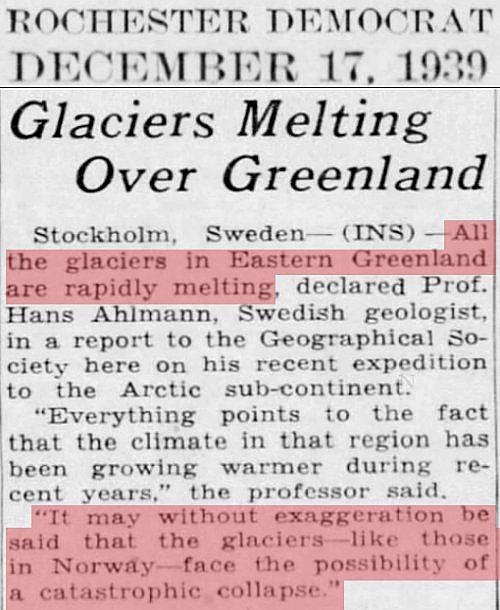 Frank Lansner also provided a more detailed reference of how Arctic data has been adjusted.

Every single one of the stations in the region has had the past cooled via “adjustments”. These adjustments are absurd, just like they were four years ago. Perhaps part of the adjustment at Vestmannaeyjar was justifiable, but taken as a whole the adjustments have no validity, just as Trausti said four years ago, before he changed his mind. 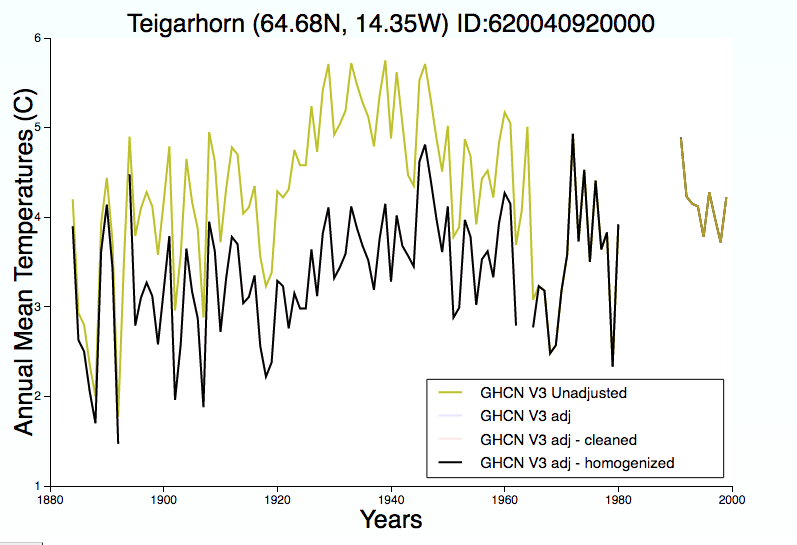 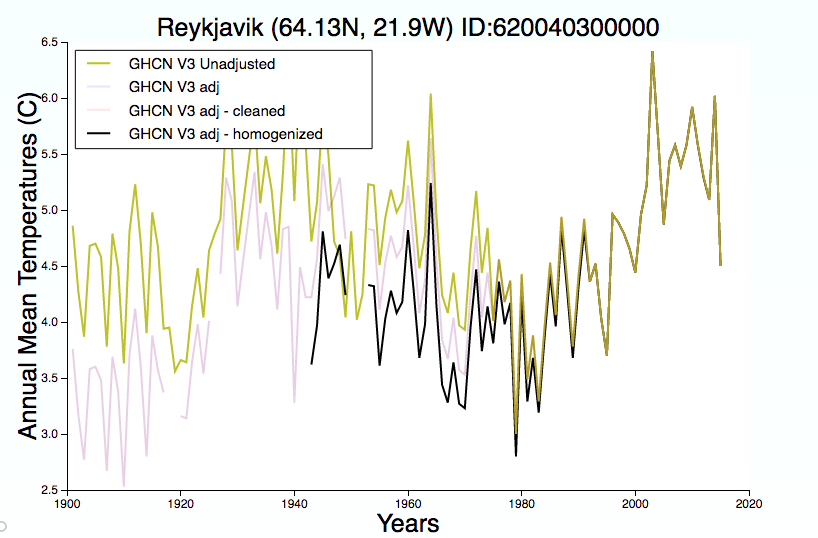 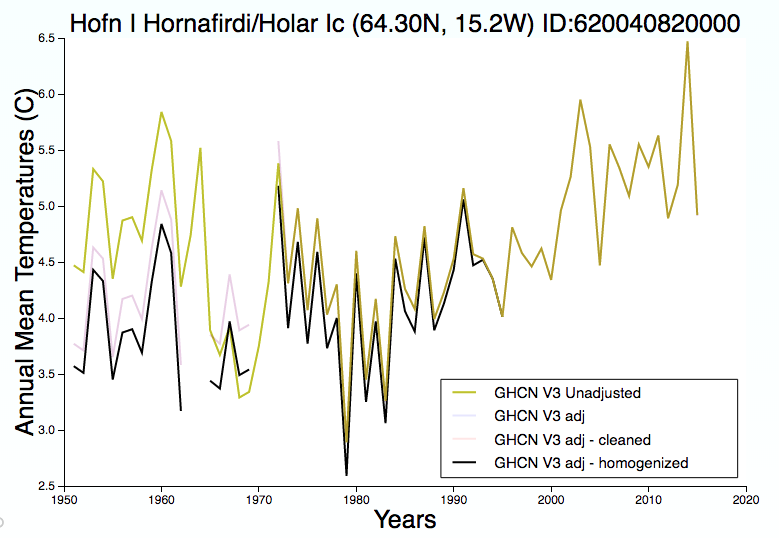 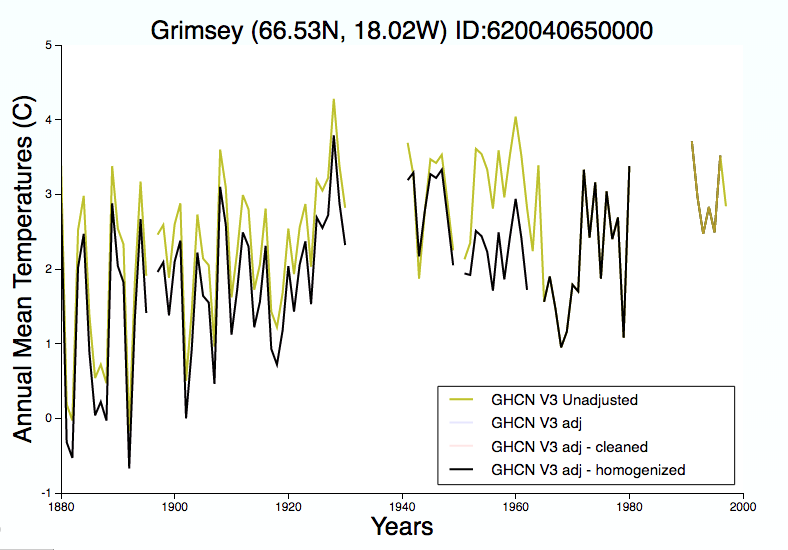 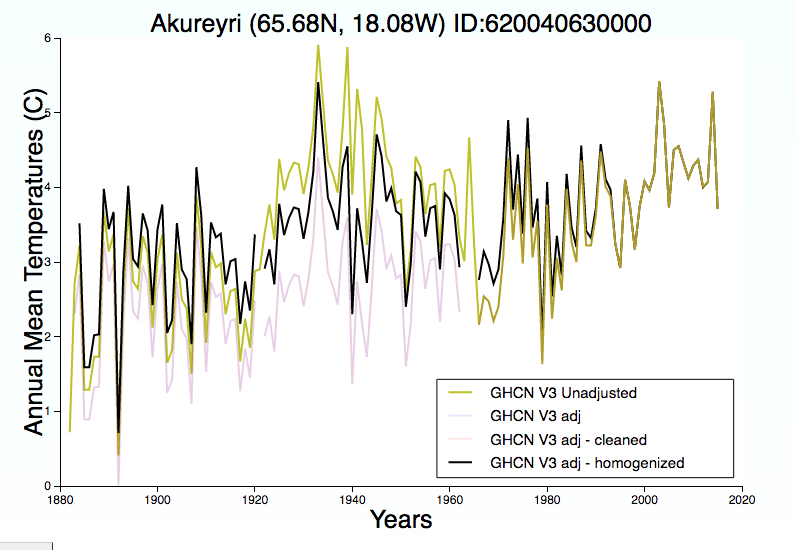 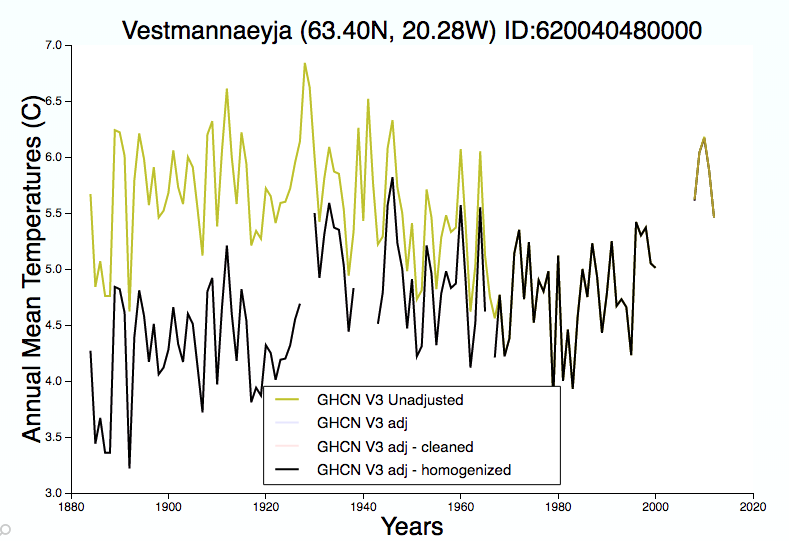 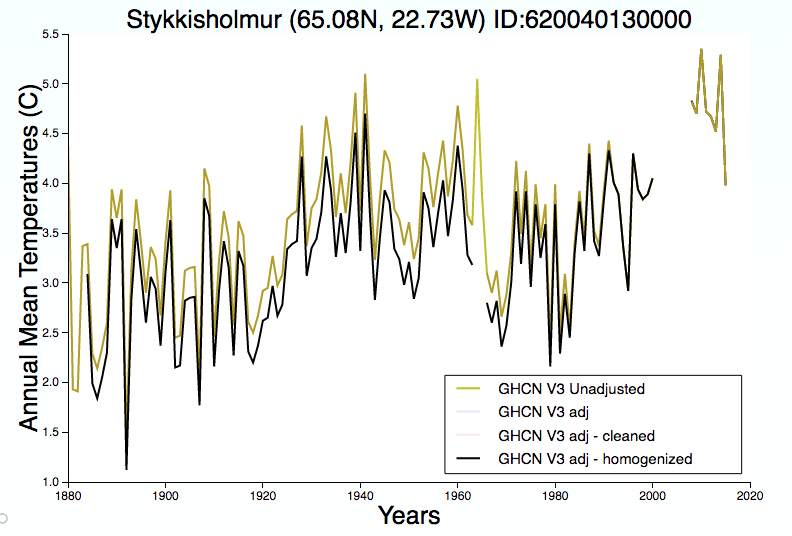 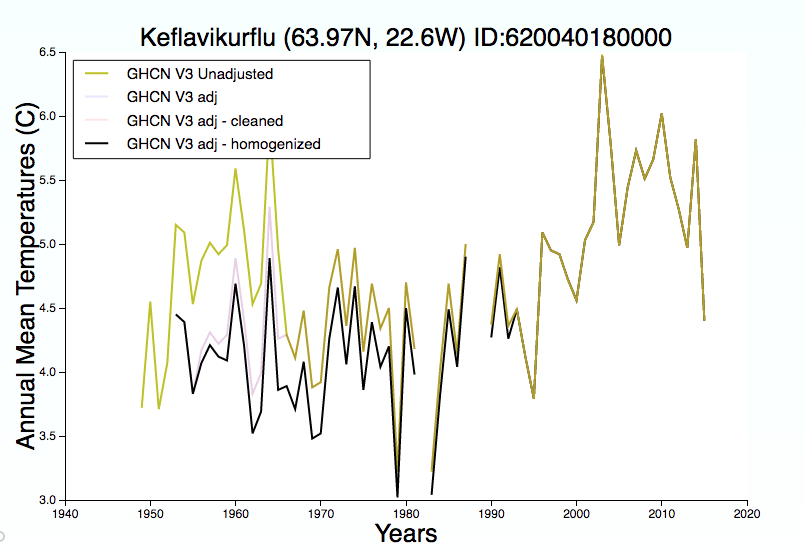 32 Responses to Icelandic Met Office Sells Out To Gavin