NOAA’s climate reporting is spectacularly fraudulent and cynical. They do things like report record heat in parts of the world where they had no temperature data that month..

But none of NOAA’s climate fraud is more cynical then their Climate Extremes Index. NOAA claims that the occurrence of hot summer afternoons has increased in the US, with 2012 being the hottest. 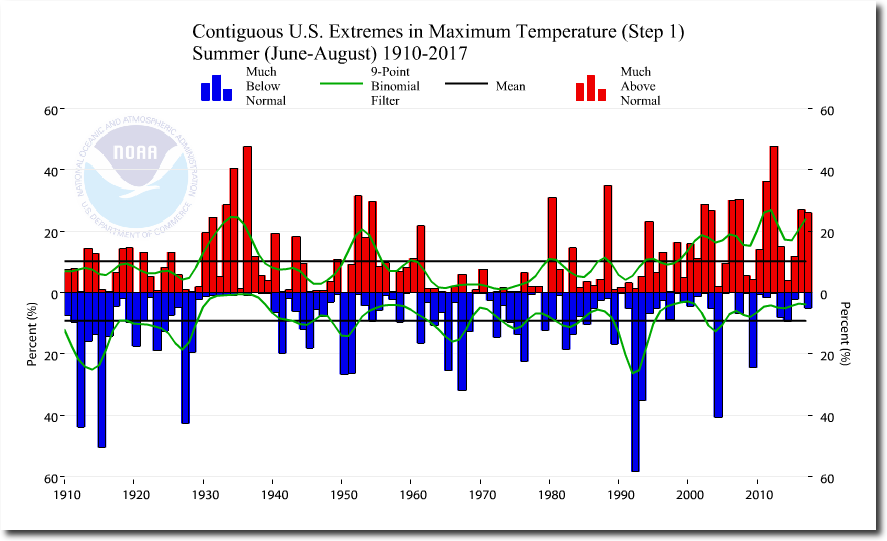 This is wildly fraudulent misinformation. The frequency and areal coverage of hot summer afternoons in the US has plummeted over the past 80 years, and is now near record lows. During the 1930’s about two-thirds of the US would reach 100 degrees during the summer. In recent years, that percentage has been less than one-third. Summer afternoons are getting much cooler in the US. The 1930’s were very hot, with temperatures over 120 degrees in the Great Plains, and over 110 degrees across much of the US. It is bad enough when NOAA makes up record high temperatures, but even more disturbing when they report the exact opposite of the actual trend.  The people behind this are criminals, not scientists – and they are enabled by their fellow travelers in the press who refuse to question their work, or talk to anyone who does.