The UN, mainstream media and some well known climate scientists are sending a special Christmas present to the world – scaring children into crying about an imaginary climate apocalypse in twenty years.

When the U.N. released its latest climate report in October, it warned that without “unprecedented” action, catastrophic conditions could arrive by 2040. Thirty years ago, the UN issued the same warning and said we only had until the year 2000 to stop the apocalypse.

GRIM FORECAST   A senior environmental official at the United Nations, Noel Brown, says entire nations could be wiped off the face of the earth by rising sea levels if global warming is not reversed by the year 2000. 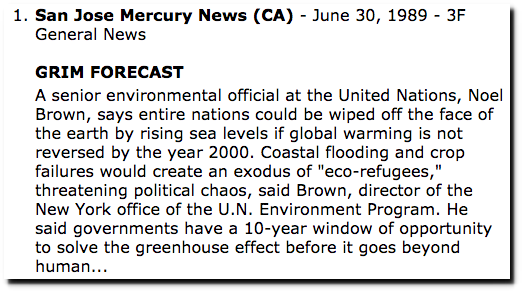 Their efforts to terrorize people have been quite successful.

A seven-month-old girl survived for three days alone with a bullet in her chest after being shot by her parents as part of a suicide pact over their fears about global warming. In 1986, the New York Times reported that climate scientists were unanimous that burning fossil fuels threatened the habitability of the planet.

With unusual unanimity, scientists testified at a recent Senate hearing that using the atmosphere as a garbage dump is about to catch up with us on a global scale.

The consequences of these changes can be estimated with computer models, and the results are troubling …  by the middle of the next century. Washington, D.C., may experience as many as 40 100-degree days in some summers; six are now unusual. Will the Planet Remain Habitable? – The New York Times

The number of 100 degree days in the DC has dropped considerably over the last 90 years. Climate alarmists are spreading wild misinformation with no factual or scientific basis.

Buried deep down in the recent National Climate Assessment, the report actually showed that the frequency of hot weather has plummeted in the US over the past 90 years. But few people in the press are likely to ever read past the wildly fraudulent summary page, or be able to interpret a simple graph. These children in the Maldives are enjoying Christmas.  According to the UN, they are are supposed to be frightened, crying and drowning. The UN agenda is to terrorize people into submission to globalism.  It is nothing to do with science.

28 Responses to Climate Terrorism At Christmas