In 1975, the top climatologist in the US warned that global cooling was going to cause terrorism, nuclear blackmail, malnutrition and starvation.

In the northern hemisphere, home to most of the world s . people, average annual temperature has fallen 1.8 degrees Fahrenheit since 1955. Tho that’s hardly enough to start you shivering, weather scientists warn that even slight cooling on a global scale can have chilling implications for humanity.

In Africa, India, and much of Asia, malnutrition and starvation could double and redouble, stunting the. human potential of dozens of nations for generations to come.  DR. Schneider. deputy director of a climate study project at the National Center for Atmospheric Research, Boulder, Colo., is one of those who are worried.  If changing climate continues to cut into world grain reserves, political tensions between have and have-not nations could make the Arab oil embargo seem tame by comparison, Schneider, told researchers at a meeting of the American Association for the Advancement of Science earlier this year. The vision of starving nations resorting to “terrorism and perhaps even nuclear blackmail” makes development of a world food security plan a matter of critical urgency,. .Schneider said.

We had less than twenty years to save the planet from global cooling. 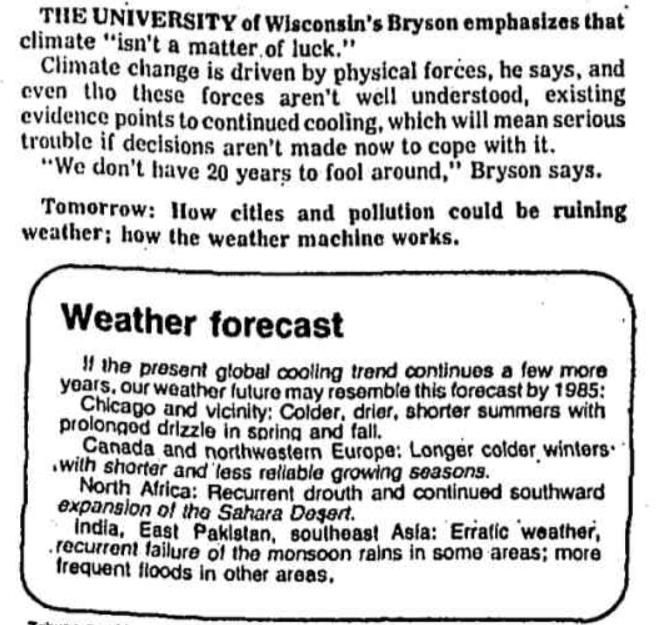 Experts now know that global warming causes terrorism, nuclear blackmail, malnutrition and starvation, and our time to save the planet ran out in 2012.