Ten years ago I wrote my first climate article at The Register.

Two authorities provide us with analysis of long-term surface temperature trends. Both agree on the global temperature trend until 1998, at which time a sharp divergence occurred. The UK Meteorological Office’s Hadley Center for Climate Studies Had-Crut data shows worldwide temperatures declining since 1998. According to Hadley’s data, the earth is not much warmer now than it was than it was in 1878 or 1941.

Is the earth getting warmer, or cooler? • The Register

This was the Had-Crut graph in the article. 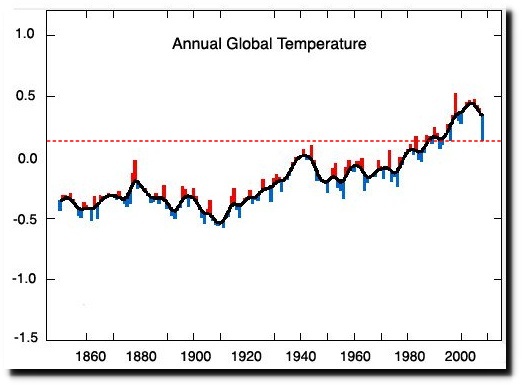 This is the current Had-Crut graph. Since my 2008 article, NASA has also cooled the past and warmed the present. The year after I wrote that article, the Climategate E-Mails were released.

“I’ve just completed Mike’s Nature trick of adding in the real temps to each series for the last 20 years (ie from 1981 onwards) and from 1961 for Keith’s to hide the decline.”

The original “hide the decline” claim is one of the most easily de-bunked in the entire pantheon of easily-debunkable “sceptic” claims. Phil Jones wrote the email in 1999, immediately following what still ranks as one of the hottest years on record, and well before the idea of a “slowdown” or “hiatus” or even “decline” in warming gained currency. So it can’t have had anything to do with hiding a global temperature decline. And the hiatus which the BBC wrote about in 2011 has since been officially disappeared by the climate mafia. Even though it was central to the last IPCC report

This article appeared on Real Clear Politics in 2009.  But since then, the political left has lost any remaining shred of integrity they might have had,

Deceitful manipulation of data, concealment or straightforward destruction of inconvenient evidence, vindictive conspiracies to silence critics, are par for the course in all scientific debate. But in displaying all these characteristics, the CRU e-mails graphically undermine the claim of the Warmers that they command the moral as well as scientific high ground.