The US has by far the best temperature record of any large area on Earth. We have an excellent network of 1200+ USHCN (United States Historical Climatology Network) stations with data going back to 1895 and earlier. The raw USHCN temperature record shows that there has been a slight cooling since 1920. USHCN is a subset of GHCND (Global Historical Climatology Network Daily.)

Cooling doesn’t suit the needs of NOAA and NASA, so they cherry picked a small subset of GHCND stations which show a large amount of warming since 1920, for use in the global GSN temperature record. 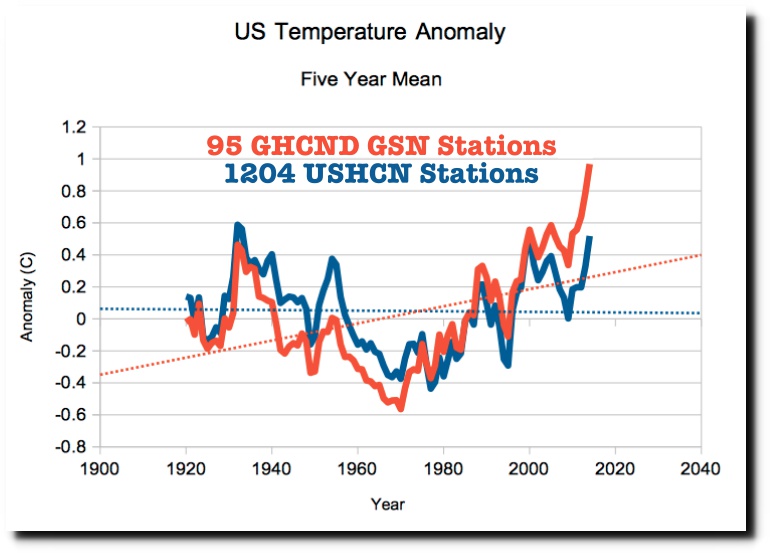 They claim that they adjust global temperatures to reduce overall global warming, but much of the fraud in the global temperature record is committed in their global station selection and homogenization, which has moved 15 degrees closer to the equator since the 1930’s.

This is the all of the US stations NOAA GHCND had available in 1920.

This is the tiny subset used by NOAA GSN GHCND in 1920.

The cherry picking of US GSN GHCND stations is a farcical tiny subset of what is available.

The average latitude of the US GSN GHCND stations has moved more than 1.5 degrees to the south.

The GHCN/USHCN methodology is all peer-reviewed, which shows how corrupt and incompetent the climate science community is.

23 Responses to More Smoking Guns Of Fraud At NOAA