It’s Not Your Imagination. Summers Are Getting Hotter. Extraordinarily hot summers — the kind that were virtually unheard-of in the 1950s — have become commonplace.

The New York Times claims are the exact opposite of reality. The hottest summer in the Northeast was 1949, and the second hottest was 1955. There is no indication that summers in the Northeast are getting hotter. The frequency of hot days in the Northeast has generally been low since the 1950s, with the notable exception of 1988, 1999 and 2002. Recent summers have been among the coolest on record. The Northeast US has had seventeen days since 1895 which averaged above 95F (35C.) Five occurred in 1911, and all but one occurred more than sixty years ago. The hottest day on record in the Northeast was July 3, 1911 and the second hottest was July 4, 1911. 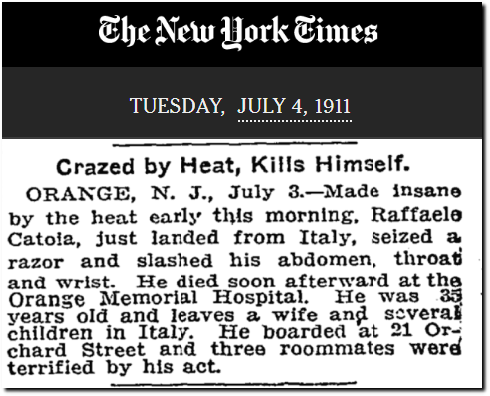 There have been many other terrible heatwaves in New York.

The New York Times claims about heat are completely fraudulent, and their claims about cold and snow are equally as bad. In 2006, they announced the “endless summer.”

January temperatures have been declining in the Northeastern US since the 19th century. The New York Times cherry-picked a warm year which went against the trend, and declared it to be science. The percentage of cold January nights has been increasing. The warmest January in the Northeast was 1932, when the Lake Placid Winter Olympics almost had to be cancelled due to no snow. By contrast, January 6, 2018 was the ninth coldest afternoon on record in the Northeast. I flew to DC that day. It was unbelievably cold in the east. The average maximum temperature in the Northeast that day was 7.5F (-14C.) I nearly got frostbite on my face due to the high winds and very cold temperatures in DC on the evening of January 6, 2018. It didn’t feel like “endless summer.” I found this leaf frozen into thick ice in the reflecting pool in front of the US Capitol on January 7, 2018. People were playing hockey right in front of the Capitol Building.