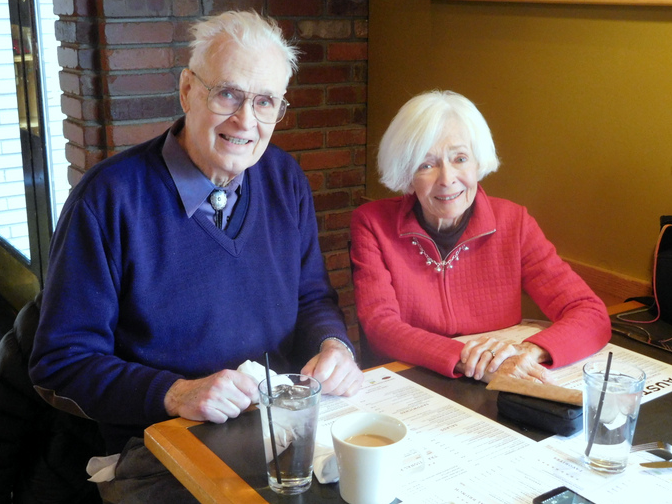 Last week I had the pleasure of dining with my two favorite Fort Collins octogenarians – Dr. Bill Gray and Sue Brackenbury.  Their mothers were best friends, but Bill and Sue hadn’t seen each other for decades. Both have been icons of the community in Fort Collins for many years, where Bill’s late wife was mayor in the 1980s. Today is Sue’s 86th birthday, and Bill has a special gift for us.

While visiting the Institute of Tropical Meteorology in Poona, India in August 1966 I met and interacted with a young (~21) and promising Indian meteorologist named Jagdish Shukla.  I have not been surprised to see his later scientific rise and very successful meteorological career in the US.

At an evening social event in Poona (August 1966) a number of us (including Shukla) were discussing the then recent China-India War (1962) over China’s infringement on India’s northern border and the political tensions which had continued up to that time.  China was then in its isolated cultural–revolution period and was belligerent to most outside nations.  China’s strong intervention in Korea (1950-53) was still relatively fresh in people’s minds.  The US was in the early stages of the Vietnam War and there was worry about China’s possible intervention on the side of the North Vietnamese as they had done in Korea.  China was also rapidly advancing in its effort to develop a nuclear bomb.  Some people (at the time) were advocating the bombing of China’s nuclear facility before it had developed the bomb (as Israelis did to the Iraq nuclear development facility a number of years later).  We discussed the desirability of the US and its allies taking such action.  As best I can remember, I did not advocate taking such action and I’m glad that no such action was ever taken.

Fast forward 35 years later to a NOAA Climate meeting Shukla and I attended in Washington around 2001.  I was trying to obtain NOAA funding for my CSU project hurricane research which was partly involved with seasonal prediction.  My talk at this meeting was directed to the complicate nature of the earth’s climate system and the lack of confidence we should have in the then current numerical climate prediction models of rising CO2 amounts causing large global warming.  I specifically criticized the unrealistic positive water-vapor feedback in the climate models, the inability of the models to resolve individual convective units, the lack of proper inclusion of deep ocean circulation processes in the models, and other factors.  This was not what the government officials and most of the meeting attendees wanted to hear (and I didn’t get the funding I was seeking).  I now see that I was naïve in thinking that the global warming question was not totally dominated by governmental and environmental politics unrelated to the science behind the warming issue.

I expected and was prepared for negative comments about the meteorological problems I had pointed out in my talk.  The first response came from Shukla.  But he didn’t question anything I had just presented.  He went directly after me personally – by announcing I was the type of fellow who had earlier advised the bombing of China’s nuclear development facility.  He implied by this that I was the type of person too far out of the mainstream to be trusted on any of the serious questions concerning the AGW topic.  Shukla was not at all hesitant about bringing up and twisting what he thought I had said 35 years earlier.  I was 36 at the time I was then in Poona and about 70 when I gave my later NOAA talk.

These types of personal attacks on us AGW skeptics (unrelated to the physics or science of the topic) are not so unusual.  I have heard a number of similar stories about the aggressive isolation and criticisms of skeptics who do not follow the global warming party-line.  Most skeptics, as a result, are not able to obtain federal grant support.  They pay a high price for trying to tell the truth.

The attempt of the warming crowd to discredit us skeptics can take many forms other than the merits or demerits of the scientific questions we ask.  Warming proponents will typically not discuss or defend the physics behind the AGW hypothesis or how their climate models produce the large global warming results they do.  They tend to have a ‘take-it’ or ‘leave-it’ mentality or they typically refuse to discuss the warming mechanisms within their models on the grounds that the scientific questions have already been settled.

The warmers usual response to criticism seems to be to try to dig up whatever negative personal information they can uncover about the skeptic and then from this manufactured degraded outlook to imply that the science behind the skeptics criticisms must be similarly flawed.

Why are the warmers so afraid to have open and honest discussion about the basic nitty-gritty assumptions of their AGW hypothesis?  I think it is because they well know (but will not admit) that the science behind the AGW hypothesis is ripe with conceptual errors and, in the long run, be proven to be wrong.

I am but one of many AGW skeptics who have been subjected to the warmer’s attempts to isolate, ignore, and personally marginalize us, in order to deflect attention away from the basic scientific problems confronting the AGW hypothesis and its model output representations.  I doubt that the global warming crowd would so act if they were really confident of the reality of their science.  The warmers are now on a downward slide (which I believe they know but won’t admit) and cannot or will not face-up to the fact that they have picked the wrong horse to bet their future scientific reputations upon.  The older warmers are now too far down the AGW road to be able to gracefully extricate themselves.  Other warmers may feel that their prestige-enhancements and the governmental funding rewards they have gotten have been worth it – even if their warming alarms are later proven wrong.