Climate experts tell us that there never was a 1970’s global cooling panic. This was the lead story in the Chicago Tribune on October 15, 1974.  Climatologists around the world reported a 2.7 degree drop in temperature (since erased by NOAA and NASA) an expansion of the Polar Vortex (now blamed on global warming instead of global cooling) and an expanding Arctic ice cap (since erased by NSIDC.) They said that this global cooling would kill half a billion people by the end of the century. all over the  world scientists are gathering data on changing global weather patterns.  THE DATA they are collecting Is startling and frightening. It shows that  growing seasons in the world s most productive agricultural areas are being shortened or disrupted.

The changes in the weather are so drastic, many scientists are convinced the world is undergoing a climate change.

climatologists around the world have come to the same conclusions …. They have detected a significant expansion of high-altitude polar winds that move above the North and South Poles, controlling the prevailing wind patterns over the rest of the world. They theorize that the expanded polar wind activity has changed the patterns of equatorial winds that normally bring monsoon rains to Africa, to India, and to Latin America.

At the same time, the polar ice caps have been growing, and the climatologists think are may be moving into a period of shorter growing seasons and shrinking crop zones, particularly in Canada and the U. S.

ASIDE FROM shifting pattern (of monsoon rains and the lengthening winters in the northern hemisphere. one of the most ominous fluctuations is the drop in the mean global atmospheric temperature by 2.7 degrees since the late 1940s. 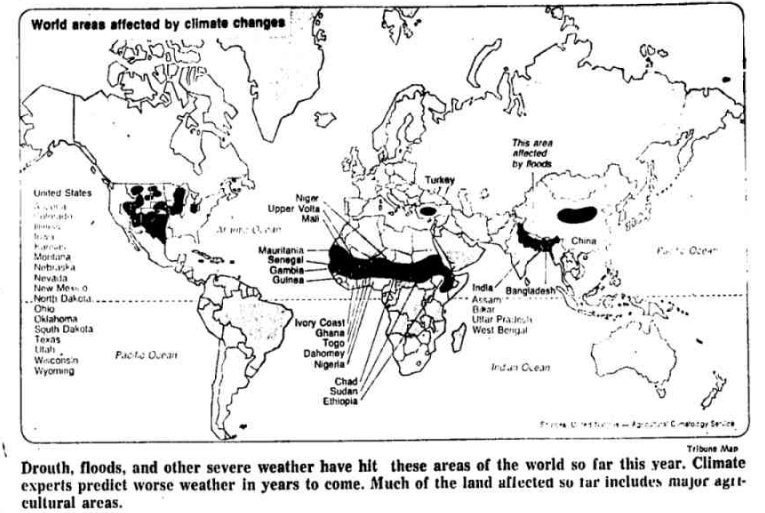