Smoking Gun Of Fraud By NASA And Gavin Schmidt

Almost 60 years ago, President Eisenhower in his farewell speech warned that science and policy is in danger of being taken over by a small group of people in academia, funded by the Federal Government, and they would replace observation with computer models. That is exactly what has happened.

Akin to, and largely responsible for the sweeping changes in our industrial-military posture, has been the technological revolution during recent decades. In this revolution, research has become central; it also becomes more formalized, complex, and costly. A steadily increasing share is conducted for, by, or at the direction of, the Federal government.

Today, the solitary inventor, tinkering in his shop, has been overshadowed by task forces of scientists in laboratories and testing fields. In the same fashion, the free university, historically the fountainhead of free ideas and scientific discovery, has experienced a revolution in the conduct of research. Partly because of the huge costs involved, a government contract becomes virtually a substitute for intellectual curiosity. For every old blackboard there are now hundreds of new electronic computers. The prospect of domination of the nation’s scholars by Federal employment, project allocations, and the power of money is ever present — and is gravely to be regarded.

Less than one year ago, all of the official government temperature records showed a global warming pause after the year 2000. Michael Mann of Real Climate wrote an article in Nature documenting this, which ridiculed people who believed otherwise.

Now, the same people claim there never was a global warming pause or hiatus, and it was just a “red herring.” They claim that they are “science” and ridicule policy makers who question their fraud. They say Congress is harassing them by holding them to the things which they themselves said a few months earlier.

Actual science shows that they not only are they disregarding data, lying and committing fraud – but they are constantly altering their data to increase the magnitude of the fraud. Just since the election, Gavin has further bumped up recent temperatures. Satellite temperatures are far more accurate and clearly show the pause. 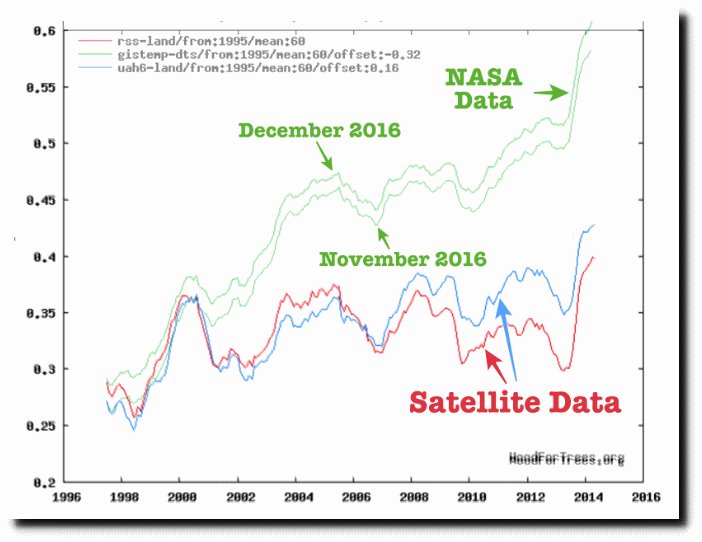 In fact, satellites show that the actual global warming pause is 25 years.