Eight Years Of Lawlessness Comes To An End

Posted on February 9, 2017 by tonyheller 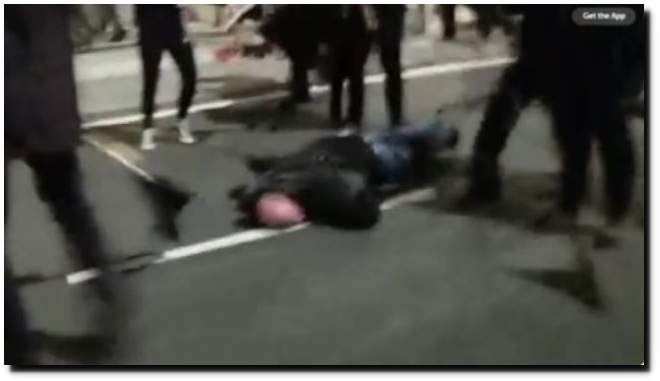 Over the past eight years, the White House encouraged progressives to attack, libel and violate the civil rights of anyone they wanted. This culminated in the Berkeley riots last week, where progressives announced they intended to violate the first amendment rights of conservatives, and the mayor telling the police to stand down as supporters of the US president were beaten unconscious. The confirmation of Senator Jeff Sessions means a return to civil rights and equal protection under the law.

One consequence of this is that the progressive press now believes they can openly lie and spread fake news. After my presentation in Olympia, the Seattle area press was full of wildly fraudulent stories about my presentation. Like this one from John Stang in the Seattle Weekly.

Almost my entire presentation was about documenting past climate change, yet the author called me a “climate change denier.” The use of the word “denier” is an attempt to link people to Nazi Holocaust deniers. I have many relatives who were killed in the Holocaust, and find this incredibly offensive.

The author also said: “Heller also identifies as a “birther,” who believes Barack Obama was not born in the United States.” This is the exact opposite of my position. I have repeatedly written that I have no opinion or information about Obama’s birthplace. One week ago I wrote up a detailed history of “racist” birtherism, tracing it back to Obama himself in 1991.

I did make a double-entendre joke tweet on February 6 poking fun at Obama and his literary agents for lying about his birthplace in 1991, and at progressives who keep lying about President Trump’s position on immigration. This seems to have confused the author, who obviously did no research on the the topic.

Then the author went on to quote the ranking Democrat who repeated the same lies about my position on climate.

The author then when on to make this wildly dishonest claim.

In his testimony, Heller claimed that possibly a dozen members of the National Oceanic and Atmospheric Administration and the National Aeronautics and Space Administration had changed temperature data so that climate scientists would conclude that global warming is occurring.

Seattle Weekly has not been able to find a single report from a reputable source that would confirm such a finding.

How could he have not known?  On Sunday of this week, one of the two principal scientists at NOAA’s National Climatic Data Center said.

“They played fast and loose with the figures”

This was extensively discussed by Senator Ericksen and myself during the presentation. How could the author have not been aware of it?

Next, the author made this dishonest claim.

In his testimony, Heller also zipped through numerous newspaper stories dating back to the 19th century that contained varying accounts of the state of the climate, some contending that the climate is warming up, others that the climate is cooling, and still others that predicted floods would be occurring by now due to climate change. He also showed a clipping from an 1846 Australian newspaper that said the Aborigines were blaming white settlers for an increase in temperatures.

“This is barely a 1950s presentation,” Carlyle said in response.

Someone else at the Seattle Weekly has recognized that their article was incorrect, and contacted me about remedying. They have already made some edits to the article, including removing some of their uses of the word “denier.” I sent them this E-Mail.

I appreciate you contacting me and removing some of the flagrant errors and personal attacks in your article. My presentation was scientific, straightforward, and easily verified.

However, damage has already been done, as many have already read the article. I would like to do an uncensored interview as a completely new article. That is the only way to set the record straight at this point.

I am a very serious scientist who came to Washington at Senator Ericksen’s request, and was not expecting the sort of wildly dishonest personal attacks I received from Senator Carlyle and some of the press outlets in the area.

I will find out this morning if they accept my offer to settle this amicably.

51 Responses to Eight Years Of Lawlessness Comes To An End