Let me be clear. My own reading of the literature and study of paleoclimate suggests strongly that carbon dioxide from burning of fossil fuels will prove to be the greatest pollutant of human history. It is likely to have severe and detrimental effects on global climate. I would love to believe that the results of Mann et al. are correct, and that the last few years have been the warmest in a millennium.

“It is ironic if some people treat me as a traitor, since I was never a skeptic”

Six years ago fake climate skeptic Richard Muller announced that he did his own temperature data set funded by the Koch Brothers, and global warming was so bad he was no longer a skeptic. All skeptics were now conspiracy theorists. Earth warmed 0.6C in a hockey stick from 1958 to 1995.

This negated the work of the IPCC conspiracy theorists, who showed no troposphere warming from 1958 to 1995.

Satellites continue to be conspiracy theorists, showing little or no net warming over the past 25 years.

The global surface temperature record is garbage. Mosher@berkeleyearth kindly explained that you can get whatever shaped graph you want by cherry-picking stations and methodologies.

The US space agency has known for 25 years that the surface temperature record is garbage, yet they ignore their own satellites because they can’t manipulate them to produce funding friendly fake temperature graphs. 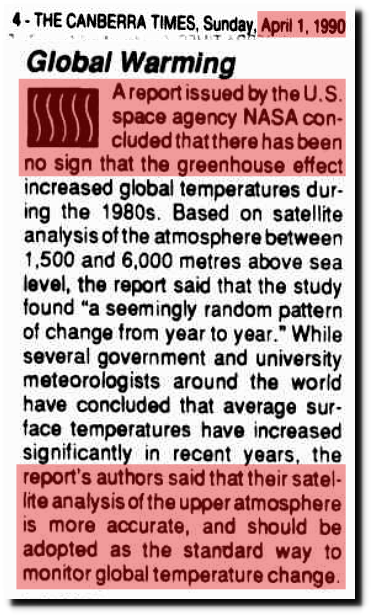 The surface temperature record is so bad, NASA can change the data at will to produce the desired results. And they do.

Surface temperatures allow NASA and NOAA to take no data, and turn it into record heat.

Fake red maps produce funding, Blue and gray maps are politically useless. This is the biggest science scam in history.