In 1977, the western drought was blamed on global cooling and expanding Arctic ice. 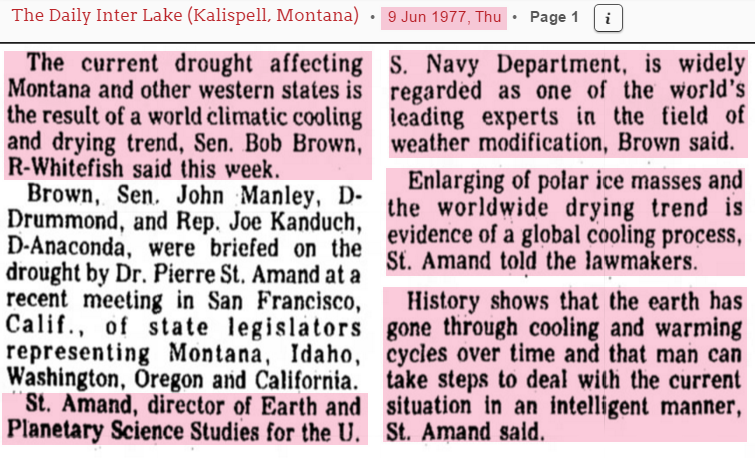 National Geographic described it as “The Year The Weather Went Wild”

The weather pattern was almost identical to winter 2015.

The criminals at the White House now blame the same weather patterns as 1977 on global warming and shrinking Arctic ice.

In 1974, scientists blamed the identical phenomenon on global cooling and expanding Arctic ice.

Scientists have found other indications of global cooling. For one thing there has been a noticeable expansion of the great belt of dry, high-altitude polar winds —the so-called circumpolar vortex—that sweep from west to east around the top and bottom of the world. Indeed it is the widening of this cap of cold air that is the immediate cause of Africa’s drought.

Climatologist George J. Kukla of Columbia University’s Lamont-Doherty Geological Observatory and his wife Helena analyzed satellite weather data for the Northern Hemisphere, they found that the area of the ice and snow cover had suddenly increased by 12% in 1971 and the increase has persisted ever since. Areas of Baffin Island in the Canadian Arctic, for example, were once totally free of any snow in summer; now they are covered year round.

There is no science behind “climate change.” It is an operation run by criminals trying to steal your money and freedom.