In 1923, the whole world was rapidly warming and glaciers were disappearing. It was reported that “Iceland is no longer … the land of ice” 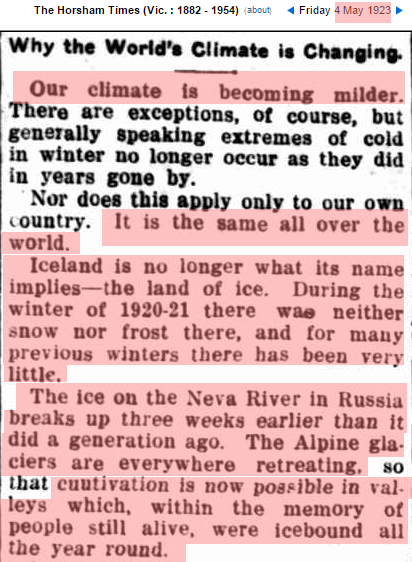 NASA (AKA The Ministry of Truth) does not show this warming prior to 1923.

This pre-1923 warming was clearly shown in the 1975 National Academy of Sciences graph, as was the cooling after the 1883 eruption of Krakatoa – which NASA has also erased.

They also photographically documented the retreat of glaciers before 1940.

Until a few years ago, NASA showed the 1920’s warm up in Iceland, and temperature maximum around 1940.

But that didn’t fit the needs of the criminals in the White House, so NASA simply made the earlier warmth in Iceland disappear.

The people generating these graphs are fraudsters, not scientists. It is sad a few clueless skeptics still pretend that the NASA/NOAA temperature records are somehow legitimate.

5 Responses to More Smoking Guns Of Fraud At NASA