NOAA US Temperatures Are Fake News

‘You should, in science, believe logic and arguments, carefully drawn, and not authorities.’

NOAA thermometers show little warming in the US since 1895, and the hottest decade was the 1930’s. But NOAA doesn’t report actual measured temperatures to the public, rather they report temperatures which have been tampered with by a small handful of employees, as seen in the red line below.

The hockey stick of data tampering is seen below. NOAA creates 1.5F warming by simply altering the data.

Most of this hockey stick has occurred since 1970, and is due to (quite literally) fake data. NOAA is losing lots of monthly station data. If a station doesn’t report in a particular month, NOAA simply makes the data up for that station. In the 1970’s about 10% of the data was fake, but now more than 40% of NOAA temperatures are fake.

Since the cold 1970’s, thermometers show the US warming about 1.2F. But NOAA’s fake data has warmed nearly three degrees. And fake data now comprises nearly half of the US temperature record.

The fake data completely corrupts the US temperature record.

But the story gets even uglier. If we remove the fake data and only look at the adjustments to actual thermometer data, even more nefarious activity is exposed. NOAA massively cooled the hot years of the 1920’s through the 1950’s to make the heat disappear, with the maximum data tampering occurring around 1940.

Government climate scientists plotted to remove the 1940’s warmth, and discussed it in E-mails.

Their data tampering allows NOAA to create red hot graphs like this one, in an effort to make people believe the US is heating out of control. 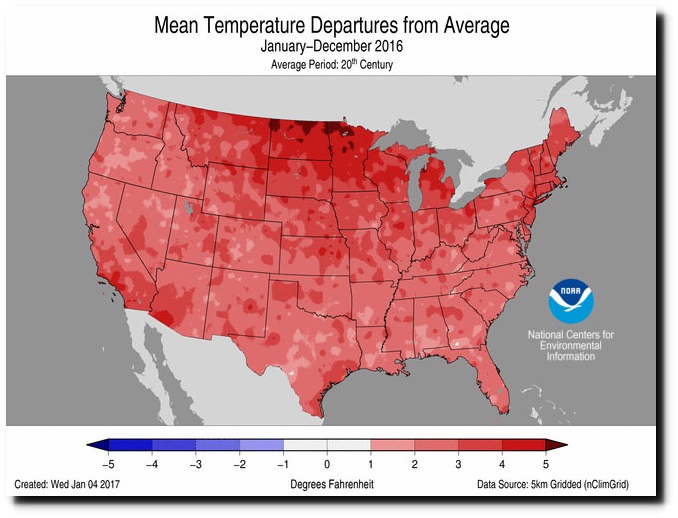 But 2016 wasn’t a hot year in the US. The area of the US affected by very hot weather was near a record low. 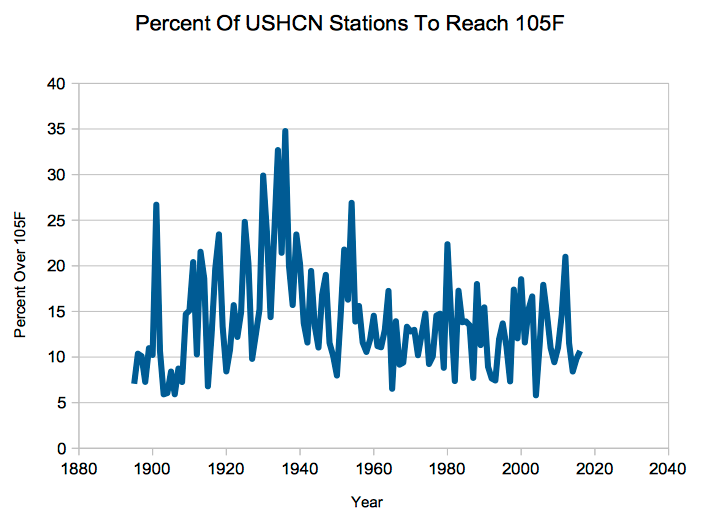 Eighty years ago, 105F temperatures were widespread throughout the US, except for New England and Florida.

But now, only a tiny percentage of the US reaches 105F.

NOAA, like almost every other government agency, has been corrupted by the Obama White House. In seven days we take our country back.

11 Responses to NOAA US Temperatures Are Fake News