The Correct Way To Analyze Data

Posted on November 2, 2017 by tonyheller If you want to come to a reasonable conclusion about a topic, you have to clear your head of what you want to believe, clear it of what you have heard, and look at the data objectively.  That is how I analyze climate data.

Below, I motion stabilized the key frames of the Zapruder video, so that car and camera movements are removed.

So what is the bright white circle?  Most likely a soft incendiary or explosive bullet lodged in his skull. In frame 317, the clearly defined white circle is much brighter than anything else in the image.

The momentum of the bullet dragged his head sharply backwards between frames 315 and 320.

People don’t normally have bright white lights inside their skull.  The claim that JFK was killed by a rifle shot from the rear is simply ludicrous. This is not “conspiracy theory.” This is objective data analysis. My conclusion also agrees with the first news reports made on November 22, 1963. 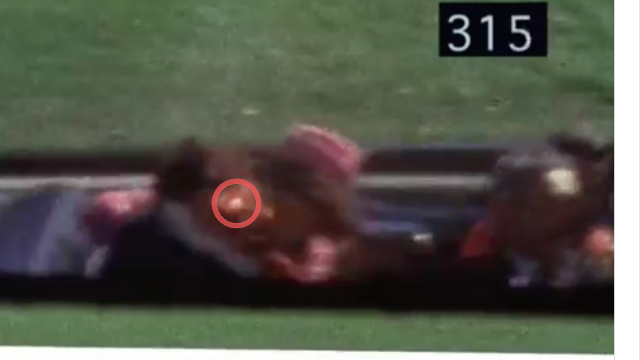 48 Responses to The Correct Way To Analyze Data